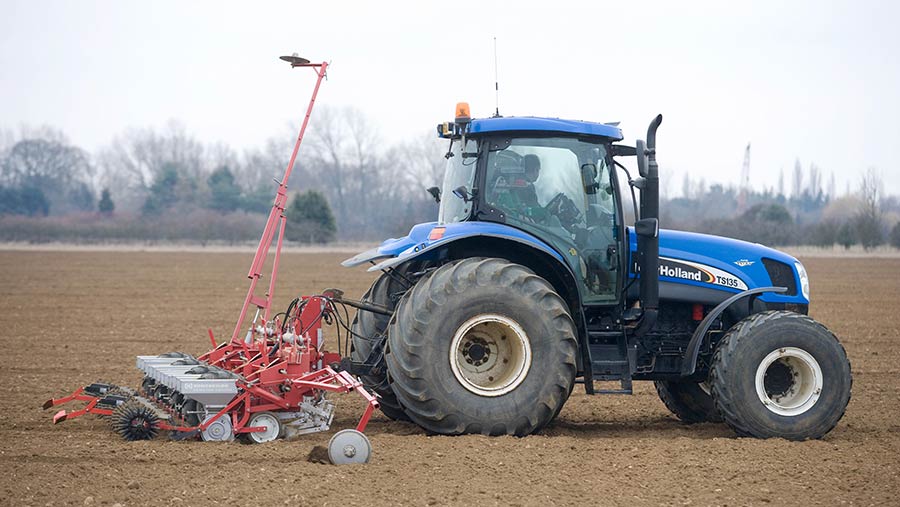 An abundance of foliar diseases is being reported in winter barley crops by agronomists in the West and North.

David Martindale points to brown rust, which thanks to a unseasonably warm February has become well established.

T0 fungicides will, therefore, be required in some cases.

Over in the East, Ben Pledger considers the first sugar beet season without neonicotinoid seed treatments and the threat of virus yellows.

He is looking to delay beet drilling to ensure crops get off to a rapid start and get through the vulnerable early stages as quickly as possible to help avoid virus yellows.

Well what a difference a year can make.

At the time of writing, the same week last year brought us the Beast From The East and this year we have been experiencing record high temperatures for February, with many sites across the region hitting temperatures in excess of 20C.

Some early-drilled crops of rye and barley are already at growth stage 30/31.

This in itself is going to make management difficult as it is clearly too early to be thinking about T1 fungicides and there is every chance that winter could still provide a bit of a sting in the tail.

Phoma is evident in many crops, even where well-timed fungicides were applied in the autumn and will need to be addressed shortly.

With larger than usual canopies already, this could well prove to be the season to have a robust plant growth regulator programme in place.

Winter barley crops have an abundance of foliar diseases in them at the moment, with the variety and site determining which ones in each crop.

Cassia is as usual carrying a lot of rynchosporium, but historically this cleans up pretty well in this variety even though its resistance is low.

Over recent seasons, Cassia has been increasingly suffering from ramularia, so applications of chlorothalonil in the programme may well be a good idea.

California has had a lot of mildew in it over winter and in certain sites brown rust has been evident too.

The predominant disease in the hybrids has been mildew, but levels of this were checked by some hard frosts in February.

With high levels of septoria in crops and mild weather I don’t think there will be a lot of debate this year around the need for a T0.

The debate will be around choice of actives and dose.

With many crops having been planted relatively early and having put on a lot of vegetative growth, the potential for lodging has to be considered high this season, especially if spring conditions continue to favour early and rapid growth.

Planting of spring cereals has started with the warm, dry weather and this is at least six to seven weeks earlier than last year.

So long as crops emerge well this, hopefully, will mean the potential from these crops will be much higher than last year, when drought and a short growing season limited yields.

Fantastic weather during most of February has allowed good progress to be made with spray and fertiliser applications, as well as spring drilling.

So far it looks like the good autumn drilling conditions have continued into the spring, with the largest area drilled during February for many years.

Winter cereals look well after a kind winter, with oilseed rape the most variable crop.

Cabbage stem flea beetle larvae are present in almost all crops so it is a case of “how many?” rather than “are there any?”.

For most crops, the plants that are badly damaged will be partly compensated for by healthier ones, which will be able to branch out and use the space.

There are some crops though where the damage is so severe that the loss of potential yield could be quite significant.

Pigeons have also caused some considerable damage in the past month so overall oilseed rape crop canopies are hugely variable.

Excessively large canopies are few and far between so most oilseed rape crops have received some early nitrogen fertiliser.

Light leaf spot has remained at low levels, which has been helped by having a large area of varieties with good genetic resistance to this disease.

Mayweeds and thistles are being controlled with clopyralid where required.

Quite often this is confined to the headlands, but be aware of the narrow window of application, the cut-off being before flower buds are visible above the crop canopy.

In winter wheat, herbicides for grassweed control have or are being applied.

With such a good autumn to apply autumn residual herbicides, most blackgrass herbicides plans were completed before Christmas.

So contact acting herbicides are now mainly being applied to control bromes and ryegrass.

Yellow rust has begun to appear across a wide range of varieties.

Infection levels are highest in the traditional hotspots nearer the coast.

With the T0 fungicide timing usually starting at the end of the month, most crops will wait until this time.

Winter barley crops look well, and despite some cosmetic yellowing of older leaves, they have not suffered as much as usual due to the winter being so dry.

Disease levels are high though, with brown rust well established due to February being so warm.

Mildew and net blotch levels are also high in susceptible varieties so some crops are carrying excessive levels of disease for the time of year. T0 fungicides will, therefore, be required in some cases.

Most winter cereals and oilseed rape crops have received their first dose of nitrogen fertiliser.

The only exceptions are forward crops of oilseed rape and winter wheat where the first nitrogen dose has been delayed.

Nitrogen has also been applied to the seed-beds of spring cereals.

For those choosing to grow spring cereals for blackgrass control, hopefully, the temptation to drill was resisted.

Grassweeds are emerging well at the moment, and another fortnight of patience could see another flush taken out pre-drilling.

I hope I won’t be eating my words in the middle of the month if we end up getting a lot of wet weather going forward!

The ability to produce fine seed-beds in the past couple of weeks has left some growers thinking about whether or not to start drilling sugar beet.

Even though daytime temperatures were pushing 20C, there were still frosts at night, managing to keep soil temperatures down around 6-7C.

With the loss of neonicotinoid seed treatments for sugar beet, aphids and virus yellows won’t be far from the front of my mind this spring.

I think growers need to go into this season with their eyes wide open, and expect to see some damage from virus yellows.

My aim will to be to get crops drilled later, into warmer seed-beds to give them every possible chance of getting up and away and grown through the early, vulnerable stages as quickly as possible.

We won’t be able to rely on the one application of flonicamid we are allowed to protect crops for the duration of this period.

Making sure adequate nutrition is present, and also minimising crop stress from herbicide applications will keep plants growing at a favourable rate.

With the prospect of drilling later, especially as we still have relatively dry soils at the moment, the conservation of seed-bed moisture is critical, and pre-drilling cultivations should be timed to reduce losses in this area.

This is my first Crop Watch after what seems to have been a very relaxed winter.

We got the rain, but a long enough dry spell after Christmas enabled most people to catch up with any outstanding recommendations.

I can tell an easy winter when I see fully maintained (sometimes re-painted) cultivation equipment sitting outside farm workshops in February.

The main topic of conversation over the winter has been the future of oilseed rape husbandry.

High incidence of flea beetle larval damage and high numbers of larvae have led to all sorts of speculation about how the crop is going to perform.

There are questions about whether a seed treatment would have done anything about ladybird-sized flea beetles coming in to a 4in tall, one-month old crop anyway.

The truth is we simply don’t know.

Never before can I remember going to conferences full of erudition where more shoulders have been shrugged and terms such as “unchartered territory” and “steep learning curve” have been more abundant.

What we didn’t get, though, was the promised cold spell.

Apart from an episode of Hampshire Commuter Belt world-stopping snow that lasted about half a day, the weather has been generally mild.

Crops – especially winter wheat in fertile sites – has continued to grow over winter and in some cases is looking frighteningly lush.

Not necessarily forward – only just moving – but still with a lot of healthy-looking biomass.

It’s been quite a challenge persuading itchy-bummed operators that just because the weather has been perfect there isn’t necessarily the need to rush out and put on nitrogen fertiliser.

Many spring crops have already been drilled, into near perfect conditions, mostly spring barley, but a few beans too.

If the weather does change, the old adage “it’s not when it goes in, it’s how it goes in” will be well and truly tested.