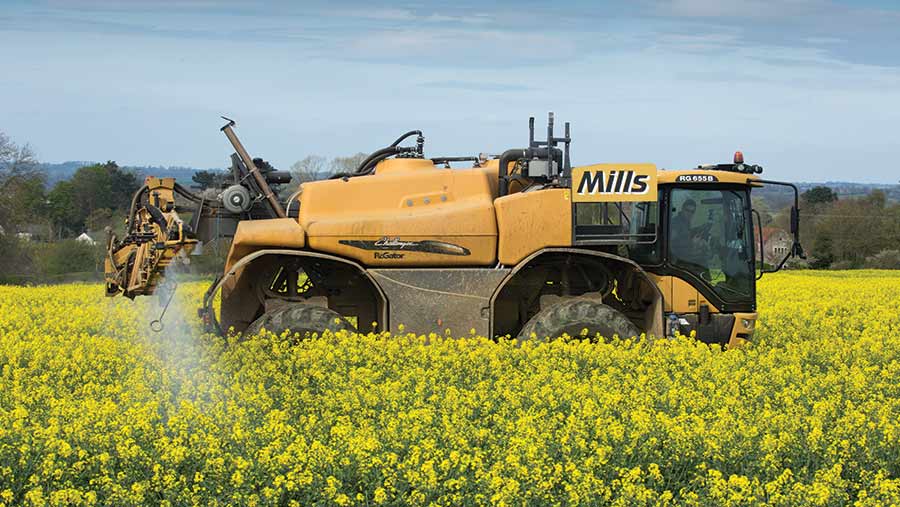 The winter monsoon has given way to a spring drought and the lack of rain is set to affect spring crop establishment, along with winter crops that are in desperate need for nutrition struggling to take up fertiliser sat on the dusty dry soil surface.

However, one positive with the dry conditions is the reduced sclerotinia risk in oilseed rape and this may be the year where savings could be made.

While spring drilling has largely caught up, there are still plenty of challenges for growers and agronomists, one being what to do with the plentiful stocks of chlorothalonil, which cannot be used after 20 May, with much less winter wheat in the ground. Another is how much growth regulator to put on stressed winter wheat crops at the T1 spray?

Fantastic progress has been made during the past month as spring drillings have been completed. Even land that was destined for fallow only six weeks ago has dried up and allowed a crop to be sown.

Some of the later sown crops were drilled into dry and cloddy seed-beds, as strong winds made it difficult to conserve enough moisture. Fieldwork has gone well, with spray and fertiliser applications on schedule, and slurry stores have been emptied.

See also: How to use active fallows to repair soils on undrilled land

Ironically, rain has become the limiting factor at the other end of the spectrum. Prior to March it was excess rainfall affecting crop growth, now lack of rain is limiting crop potential.

Winter wheat crops have improved during the past month. Unfortunately, the dry, cold March has not been conducive for tiller development in the backward or thin crops. However, considering how poor some wheat crops looked prior to Christmas, it is good to see signs of improvement.

Septoria tritici development has been limited in the past month due to the weather being so dry. Mildew is hard to find with crops being a lot thinner and more open.

Yellow rust is the key disease. It has been present in coastal areas for some weeks and is now appearing further inland. The rust is present in the usual suspect varieties, but is also appearing at alarming levels in some varieties thought to be more resistant. The ever-changing dynamics of yellow rust due to the new races that keep appearing provide a fascinating challenge.

T0 fungicides are currently being applied, along with a plant-growth regulator, although the rates of growth regulator are lower than in previous years.

Winter barley crops have just received their T1 fungicide. Net blotch has been the main disease issue, along with some brown rust. Broad-leaved weeds have also been controlled at the same time before the crop provides sufficient competition against further weed flushes.

Spring barley crops are emerging well in most cases and for those destined for malting markets the final dose of nitrogen fertiliser will soon be applied. Manganese will also soon be required for crops on lighter soil types.

Winter oilseed rape has struggled in the past month, due to the effects of cabbage stem flea beetle larvae, persistent pigeon grazing and waterlogging. Most crops are now recovering, although it is a little disturbing to see some fields flowering when the crop is only knee high.

It will not be long before consideration is due for sclerotinia control. If conditions remain exceptionally dry, the sclerotinia threat will be reduced, which may make it worth risking not treating the poorer crops this year.

Spring beans have emerged well, despite some of the February-sown crops being waterlogged soon after drilling and then the soil surface baking out during March. Once again, beans are proving to be a robust crop that can still emerge in the most adverse conditions.

Pea and bean weevil numbers have been low so far, but will need to be monitored. Pre-emergence herbicides have been applied, but unfortunately for the later sowings there has not been the subsequent rainfall to achieve the best herbicide efficacy.

At the last time of writing we were under the influence of wet weather and waterlogged soils. We are now suffering from four weeks with no rain and soils that are baking out quickly. The workload on farm is nearly completely caught up and we are looking at possibly the earliest start to maize planting I can remember.

All winter crops are now caught up in terms of workload. However, the dry conditions mean that many crops have effectively still to receive much of their first top dressing as the second ones are about to be applied. Winter OSR crops are not branching as profusely as usual and are looking thin as they come in to full flower. These crops desperately need rain and quickly if they are to go on to yield at a reasonable level

Winter barley crops are variable depending on how early, or otherwise, they received their first top dressing. Those that received them while there was rain to wash it in are looking fine, whereas those that did not are looking short of nitrogen. On the plus side the winter barley is a long way behind in terms of crop development compared to normal, so if we get rain soon the impact of the dry spell may not be too serious.

Winter wheat crops are all over the place, from barely emerged to looking and behaving completely as one would expect for winter wheat at this time of year. These crops will again want to see some rain in order for them to gain full utilisation of applied nitrogen.

With crops now under moisture and by association lack of nitrogen stress, the big dilemma is how much or even whether a growth regulator should be used at T1. To over-apply under these conditions could further stress crops, but to not apply at all and then have rain and rapid growth could potentially lead to crops that would be prone to lodging.

In short, nearly every decision that needs making at the moment presents a bit of a dilemma and knowing whether the right decision was made will, in all likelihood, only become evident with the benefit of hindsight.

The 2019/20 cropping season got off to a dreadful start and continues to be very tricky for the winter crops. Let us hope that the season proves to be a lot more straightforward for the spring crops, which at the time of writing are just beginning to emerge.

In winter wheat with early spring growth being slow, the need for a plant growth regulator at T0 has been low on most crops, so the T0 fungicide has been kept in the can on most varieties.

Varieties with a low rating for yellow rust, or those showing signs of the disease, have been treated with tebuconazole plus or minus azoxystrobin. Untreated crops will be monitored between now and T1 timing, and treated if needed with the same chemistry should the disease appear.

The slow early season growth has been, in part, down to ground conditions going from too wet to travel, to too dry on top to take in nitrogen fertiliser in only a few days.

Broad-leaved weed emergence in cereals has been relatively low on the whole, however, with the ground starting to crack we could see weeds emerging from depth after the usual contact herbicide addition to the T1 fungicide, potentially pushing herbicide applications back. With this possibility, keep in mind latest application timing for individual herbicide products.

With most spring drilling completed in a relatively short time period in the area, the window for crop emergence will be much longer, dependant on soil type and cultivation method. I have fields of spring barley right next to each other that were drilled on the same day, one at two leaves, the other with dry seed sitting in dust. The only difference being an extra pass with the cultivator, which removed precious moisture.

With little rain forecast, emergence of the latter could be delayed significantly. This dry period, with differing moisture levels between soil types within fields, will vary emergence of sugar beet. The knock-on variation of crop growth stages will make identifying the correct timing for herbicide applications difficult, and even more so where weed control programmes are without desmedipham.

This weather is starting to bring back ugly memories of the spring of 2011. 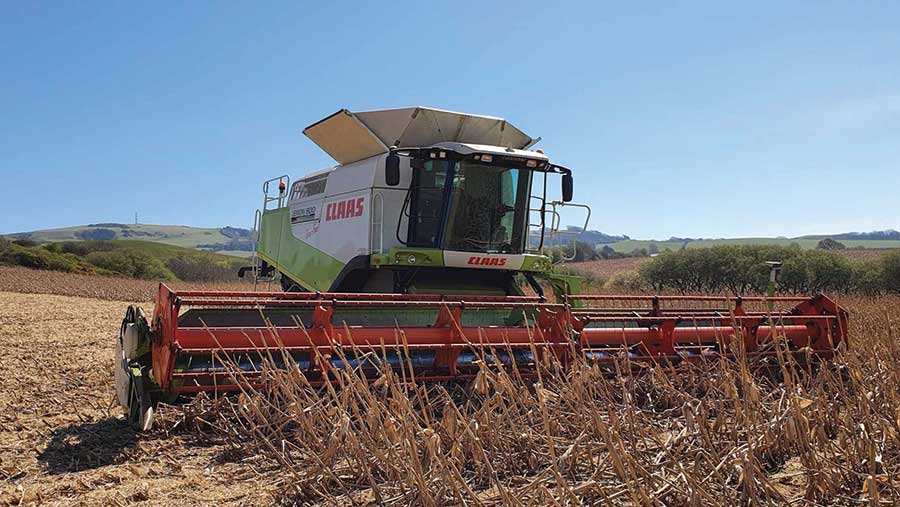 I wrote my last Crop Watch on 16 March and I was complaining that a lot of ground was still too wet to be able to apply fertiliser.

I’m writing this one on 13 April and I am now praying for rain so that the fertiliser that has since been applied can be washed down to the diminutive rooting system these plants have. OK, Mr Almighty, you’ve proved you’re in charge, but can we just have a break?

There’s been a frenzy of spring drilling, pre-emergence spraying and fertiliser application. Spring seed-beds, on the whole, have been excellent. The earlier drilled crops are now coming through, but ironically those that had to wait (because it was too wet) are possibly going to struggle – because it’s too dry.

So all I can do is keep a very close eye on costs. A bit like lockdown, I have to ask myself: “How essential is this input? Am I doing this to cover my *rse or is it going to benefit the crop?”

The next concern is how to empty spray stores of chlorothalonil legally, given that vast areas of proposed wheat have gone to fallow/spring oats/linseed/spring OSR. If the government can give a stay of execution on MoTs and business rates, you would think that the Chemicals Regulation Division (CRD) could realise that outside their windows there is a world.

And then I got a reminder from FACTS that I have to fill in some pointless assessment or I will die. What planet do they live on?

We’ve also had some lighter moments. One was my farmer on the Isle of Wight combining his forage maize in April, getting enough grain to cover the cost of growing and combining it.

Having an agronomy meeting with Charlie Flindt (NRoSO points there) with him sat on one staddle stone in the yard and me on the other was another lighter moment. We looked like a pair of gnomes….