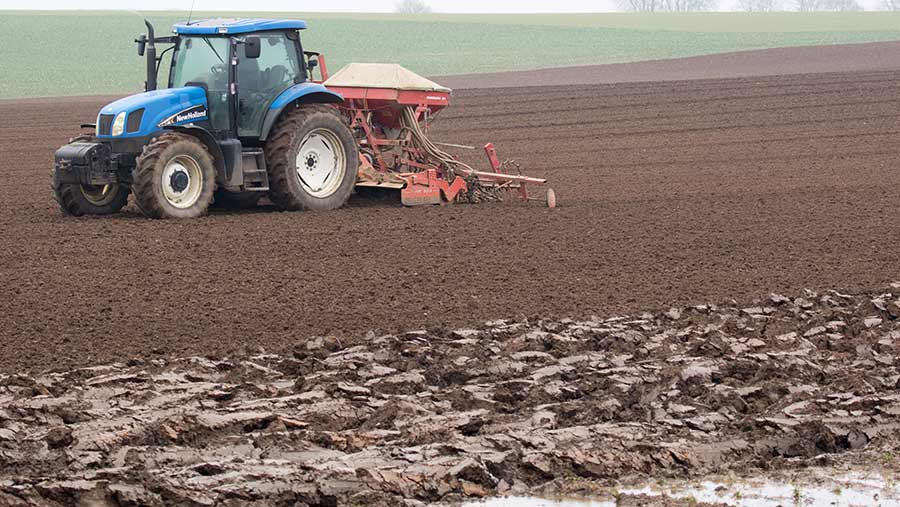 It is proving to be a very challenging autumn for many arable farmers, with one agronomist estimating that 35% of his oilseed rape has already been written off in the East.

Added to this, the monsoon conditions are fuelling concerns whether growers will get their winter cereal crops drilled in light of challenging soil conditions, especially wheat following maize where fields have suffered during harvest.

While there is still time for soils to dry sufficiently for wheat drilling, most concern is reserved for winter barley, as that needs to be in by the end of the month. 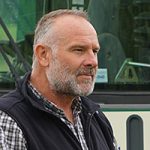 Between 21 September and 20 October inclusive, it has rained every single day with a cumulative total in that period of 148mm. Praying for rain to help the OSR did the trick then!

The OSR situation is grim. The late August/early September drilled OSR has, almost without exception, failed through a combination of an apparent lack of vigour, adult cabbage stem flea beetle and snuff-dry seed-beds.

The dry start to September, combined with impotent pyrethroids and the incessant cabbage stem flea beetle activity in slow emerging and backward crops, means that almost 35% of the original drilled OSR area has now been abandoned.

I am still writing off OSR crops by the day and managing growers’ expectations of the good-looking remainder as the scale of the larval problem becomes apparent. Oh, and phoma and light leaf spot are appearing. On balance, I don’t think I’ll be worrying about OSR in 2020.

Thanks to the conditions, less than 10% of winter cereals have been drilled on my farms. Attention to detail in terms of drilling depth and seed cover will be crucial when we do finally start, but conditions will be challenging for a while yet.

Mauling seed into saturated, sloppy seed-beds has never been a good idea, but patience is likely to be a very rare virtue over the next couple of weeks.

Making sure seed is both deep enough and well covered, and that the forecast allows the application of pre-emergences as soon as fields are drilled, becomes sacrosanct: drill it, spray it, drill another, spray that.

Not time to panic yet – we have had wet Octobers before and we have also had many mild dry Novembers. We get what we get.

Every cloud has a silver lining and at least the stale seed-beds have had a chance to flush with blackgrass, meaning the original plan to drill late October has come to bear and the threat of barley yellow dwarf virus has similarly lessened.

There’s still plenty of time for the autumn to turn around and by Christmas for us to be moaning about how dry it is.

Remember, even if it is November drilled, it’s the weather in May, June and July which has the greatest impact on harvest and quality, not rain in October. Onwards. 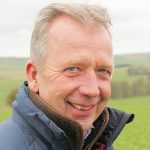 It’s hard to believe that less than a month ago much of our ground was too dry to give any sort of weed flush.

Since then a good 200mm of rain has really brought the blackgrass, brome and cereal volunteers along. Just what we’ve been waiting for. Only now we’re waiting for things to dry out enough to drill.

Thankfully, the land has been taking the rainfall well. The fact that we’ve yet to see many land drains running underlines how dry our soils have been.

Stubbles that remain uncultivated and those set up well with a single tillage pass are in pretty good shape and should dry out quickly once the rain stops.

Much of our maize ground has suffered a real harvest battering. Providing the weather relents sufficiently for enough remedial work, we’re still intending to put most of it into wheat. But we’re prepared to switch to a spring crop wherever we can’t get the quality of seed-bed we need.

Mauling in late-drilled cereals is something we avoid at all costs. It sets the crop back from the start and seriously gets in the way of the pre-emergence and peri-emergence herbicide activity we need to keep on top of blackgrass.

It’s been a long time too since we’ve had a wet autumn without Secure or Deter (clothianidin) to keep the slugs at bay. The scale of activity we’ve seen in stubbles and the level of pre-baiting kills we’ve achieved suggest we’re going to need all the help we can get in managing slugs this time around.

We’re quietly optimistic about wheat drilling on most of our ground as we’ve still got more than enough time.

More concerning is the winter barley, which really needs to be in before the last week of the month although hybrids could stand a further week or two.

Such limited post-emergence herbicide options with barley make it vital to have seed-beds that allow reliable seed cover and pre-emergence activity, not to mention reasonable slug deterrence; especially if conditions get in the way of rolling.

Just like the wheat, we’ve been reviewing barley seed stocks and topping them up where necessary so we can drill at up to 400 seeds/sq m rather than the 325 seeds/sq m planned for earlier sowing.

Finally, our OSR has been in need of plenty of intensive care. It’s amazing how many flea beetles were still active last week. It looks like we might have turned the corner in the past few days, though. At long last the crops appear to be getting ahead of the beetles. 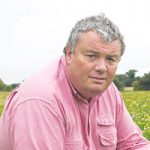 The South West has borne the brunt of the wet October with rainfall up to 3.5 times the long-term average in some weeks. Unsurprisingly drilling has been at a virtual standstill.

The few crops put in on kinder soils have established well. In many situations cropping plans have been revised as it seems improbable that the heavier, poorly drained fields will ever be established this autumn.

Poorer seed-beds mean pre-emergence herbicide programmes will need consideration. If seed-beds are lumpy and unconsolidated with seed at variable drilling depths, then early post-emergence treatments will be more appropriate.

While high-yielding wheat crops can result from late October drillings, winter barley is likely to suffer. Crops drilled now will take around 15 days to emerge, meaning we will not see a lot of green until November.

This means the crucial T sum 170C for aphid secondary spread will take longer to reach. Therefore, plan insecticide applications carefully to avoid unnecessary applications which will only hasten resistance.

Bear in mind that in winter barley many of the “hotter” prosulfocarb mixes with flufenacet are pre-emergence only. Take every opportunity to destroy the current grassweed flushes with glyphosate.

Blackgrass is much in evidence in surviving rape crops. The justified reluctance to use pre-emergence materials such as metazachlor has given the weed a head start and rather too much reliance is being placed on clethodim, which cannot be good for the longevity of this material.

Winter beans have been established by ploughing which has allowed a few clients to get some acres under their belts. They will receive their usual heavy duty pre-emergence mix of propyzamide, pendimethalin and clomazone.

I hope the coming week allows drilling to proceed and that I have some crops to report on in a month’s time. 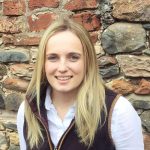 Rain, rain and more rain is all we’ve seen for the past month in Cumbria. Drilling has been testing, and we have had to take any opportunity possible to get crop in the ground.

Overall, roughly 70% of barley has been drilled, mostly during the good week of weather we had in September. However, wheat has taken a real hit and only about 25% of our expected wheat acreage has been drilled.

Where drilling has been successful crops are generally looking well. However, it is not uncommon to see parts of fields under water or headlands not drilled due to the conditions.

We are getting too late for winter barley now and moving our focus to hybrid barley or winter wheat.

But there are some farms with conventional barley seed in the shed and we are increasing seed rates accordingly and hoping for some kind weather to give the crop a good start.

My current concern is that even where crops have been drilled, autumn herbicide has often not been applied due to difficulty travelling.

Grassweed control is my main concern, especially in barley where we have limited options post-emergence. Although we don’t have the blackgrass problem of further south and east, our main problems are annual meadow grass and bromes. 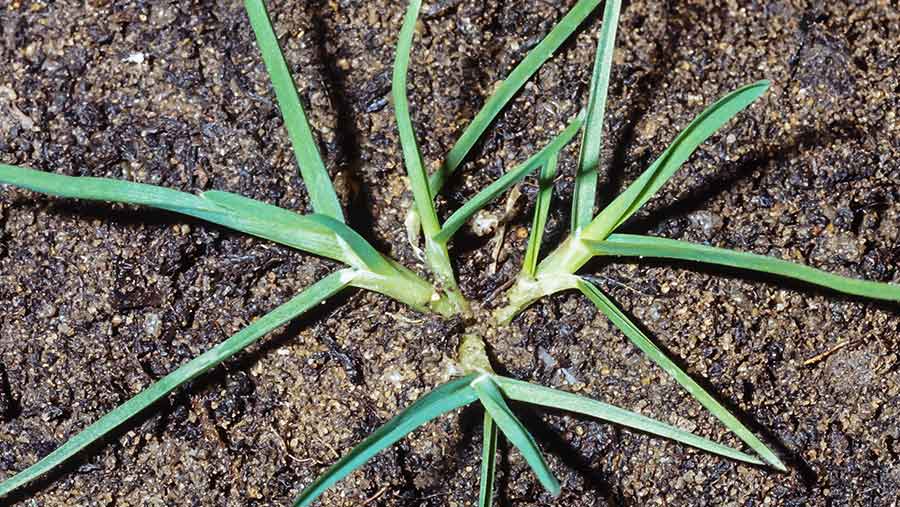 These grasses are increasingly hard to control once they reach the tillering stage.

Many fields have annual meadow grass at this stage now and these wet conditions are perfect for it to take hold and become a real nuisance by using nitrogen and causing harvesting problems.

Brome is an increasing problem in our region and more farms are having to review their rotation to get on top of the weed.

Growers are adding wheat where they have previously grown only barley, as later drilling gives the option of using a stale seed-bed to reduce brome populations and a wider mix of chemical options.

We have also been fighting the weather to get through the maize harvest which is now about 90% complete and producing some good yields and high quality output.