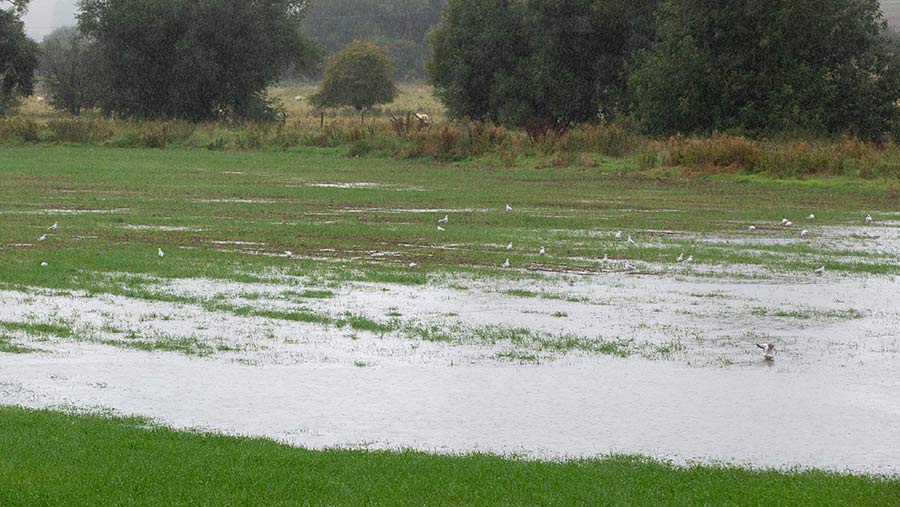 The wet spell continues and there are fears that growers could lose their nerve on delayed drilling of wheat.

Persistent wet weather is also affecting weed strategies, with many of the cereals drilled so far in the north not receiving a pre-emergence herbicide, which could lead to some disappointing blackgrass control.

Flea beetle continues to devastate oilseed rape crops and one frustration is that some crops have suffered worse than others for no obvious reason. An increased reliance on pyrethroids also increases the risk of resistance.

The oilseed rape crops that I have in the area look well in general. Most were drilled into moisture or had a rain straight after drilling.

A move back to establishing the crop with a conventional drill, rather than with a subsoiler or one-pass cultivator, has led to more even seed placement, and hence, even emergence. This has allowed the crop to fare better against the flea beetle pressures we have seen in the past few years.

Hot weather over the August bank holiday brought them out in force, and a well-timed insecticide did enough to knock back the pressure to allow the plants to grow quickly to two true leaves and beyond.

See also: How a Cambs grower has halved his glyphosate use

The best crops of OSR I have seen have been grown on land which hasn’t had oilseed rape for more than six years. These haven’t needed any insecticide either.

Clethodim has now been applied to control blackgrass, and the search for aphids in the crop begins with regards to turnip yellows virus control.

Very dry cereal seed-beds throughout a good proportion of September did not give much of an opportunity for blackgrass and volunteers to chit. However, the recent rains have promoted flushes which are now emerging.

From listening to reports from over the country, it seems this area got off lightly with the amount of rain we have had. Land is in good condition after recent showers, having taken the rain well.

Weather permitting, in the next 10 days we will see seed-beds sprayed off with glyphosate before the drill enters the field. The delay in drilling to mid-October is more pertinent this year, not only for blackgrass control, but with the loss of clothianidin.

Chemical control for aphid vectors of barley yellow dwarf virus will solely be down to insecticides applied through the sprayer.

In field monitoring, forecasting and the cumulative daytime temperatures to 170 day-degrees will all play a part in deciding on the correct time to apply these insecticides.

I am concerned though that the increased reliance on pyrethroids in this area will drive resistance.

There are currently two topics of conversation: flea beetle and when it will stop raining.

Regarding the latter, at the time of writing, on the Hampshire/Surrey border we have had 197mm over the past two weeks. So that’s enough now, thank you.

As far as the former goes, once again there is plenty of head-scratching going on as to why some crops have suffered worse than others, and soul-destroying incidences of crops that emerged, got to 3-4 true leaves, and were then decimated by ladybird-sized flea beetle, the likes of which I had never seen until two years ago.

All I will say is that for the second year running, the most successfully established OSR crops have been those sown in mid-August at a healthy seed rate. Even with high levels of stem larvae in the spring, if there were enough plants there, they compensated and yields were more than satisfactory.

The rain has at least given some of these bone-dry fields an opportunity to green up. I’m asking people not to be tempted to drill without spraying off first. That’s a bit like re-painting a tractor without washing the dirt off first – it looks OK for a bit but causes problems later on.

Talking to farmers about delaying drilling to reduce the risk of barley yellow dwarf virus and to help with grassweed control is a sensitive subject at the moment. Most would just like to get something started.

The positive point is that we desperately needed the rain, and it has fallen on to soils with a massive moisture deficit. Another good thing is that we are unlikely to be getting reduced efficacy from the residual herbicides due to dry soils – provided they actually do get sprayed pre-emergence of the weeds.

One line of thinking in these difficult grassweed situations is: if you don’t think you’re going to be able to spray it, don’t drill it.

With the loss of Deter (clothianidin) seed treatment many growers had made the decision to delay drilling until the last week of September in order to reduce the risk to crops from barley yellow dwarf virus.

However, the last week of September saw the weather break and the heavens open up, and it has pretty much rained ever since. The result is that there is very little in the way of winter cereals that have been planted.

Hopefully, we will get a window sometime during October. The same bad weather is also delaying the maize harvest.

Early indications are that maize yields are going to be good, despite many crops not having a big stature. Yields are being reported in the 45-52t/ha region, with dry matters between 32% and 37%.

The winter rape crops have by and large established OK, but flea beetle has had an impact. So some crops could end up being a bit patchy.

The 2019 harvest was on the whole a very good one for cereals. The heavier land or areas that had sufficient rainfall all the way through have produced some outstanding yields, while lighter land that became a bit droughted in late May has struggled to produce the really big crops.

Winter barley was the stand-out crop, producing, on some farms, yields in excess of those that might be expected from winter wheat. Grain quality has been good and straw yields have been exceptional.

The six-row hybrid barleys have produced the highest yields, but the two-rows have not disappointed, with both KWS Cassia and California continuing to perform well in this region. Many of the newer two-row varieties seem to struggle to keep up with these two older, but reliable varieties.

On the wheat front, Graham continues to impress and the newer varieties LG Sundance and KWS Extase have both put in solid performances and were both noticeably cleaner of disease in the field than other varieties.

Hopefully, before I write again we will have had some weather to allow next year’s crop to be planted.

The weather has gone from one extreme to the other in the past eight weeks. Persistent dry weather with the hope for a little rain has now changed to regular heavy downpours.

Despite the large quantities of rainfall most land has soaked it up well, a sign that soil conditions are good. Despite the frustrations of not being able to sow cereals, the rain has kept seed drills out of the field for longer than expected.

This has reduced the need to negotiate the merits of delayed sowing in relation to better blackgrass control. Also large flushes of blackgrass are beginning to appear which will be controlled with glyphosate prior to crops being sown.

So some positives have emerged from the recent rain delays, although some dry weather is now required in order to avoid major changes to cropping plans.

Oilseed crop growth stages are hugely variable, even within the same field, ranging from cotyledon stage to seven true leaves.

Cabbage stem flea beetle activity continues to be a menace to most crops although the larger plants are now able to withstand the attacks. The big unknown is what larval damage to expect in the coming months.

Contact-acting herbicides for the control of blackgrass or annual broad-leaved weeds are being applied on the more advanced crops. For the late emerging crops, herbicide plans are being adapted due to differences in weed emergence.

So far very little winter wheat or barley has been sown. Drilling barley crops beyond mid-October runs the risk of achieving a much lower yield potential, with hybrid varieties seemingly more able to cope with later timings than their two-row counterparts.

Slug damage is beginning to appear in wheat crops sown after oilseed rape, but so far damage has been at low levels.

One cause for concern is that many of the cereals drilled so far could not receive a pre-emergence herbicide due to persistent wet weather. So a combination of early sowing and compromised herbicide programmes could well lead to some disappointing blackgrass control.

In the absence of the Deter (clothianidin) seed dressing the earlier sown cereal crops will need monitoring for aphids. There are some good decision support tools available online to help with assessing when to apply foliar insecticides. With such delays to cereal drilling this autumn, insecticide use is likely to be lower than first expected. 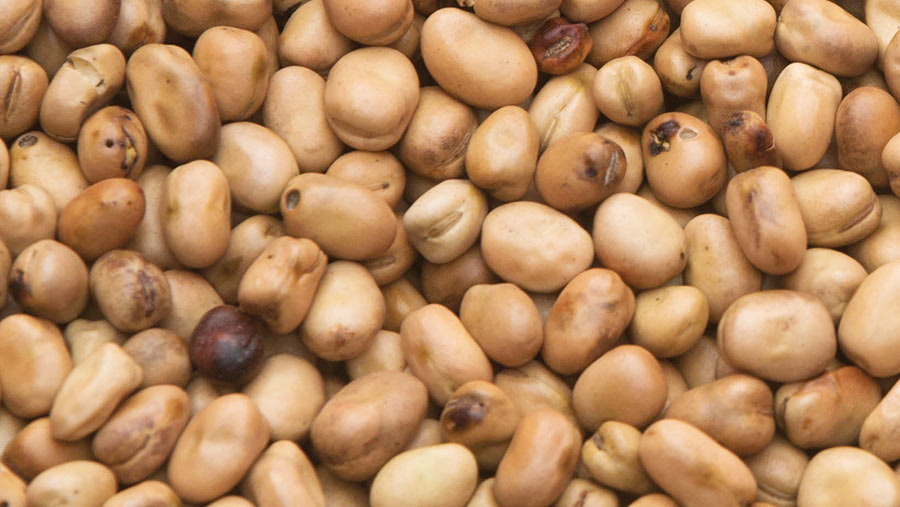 Winter beans can now be sown, and if you are home-saving seed make sure it is tested prior to drilling as stem nematodes have been found in numerous samples. Sowing infested seed can cause significant yield losses as well as long-term problems for future pulse crops, as the nematodes can remain viable in the soil for many years.

Make every effort to apply the pre-emergence herbicide, as with so few post-emergence options available this forms the cornerstone of weed control.