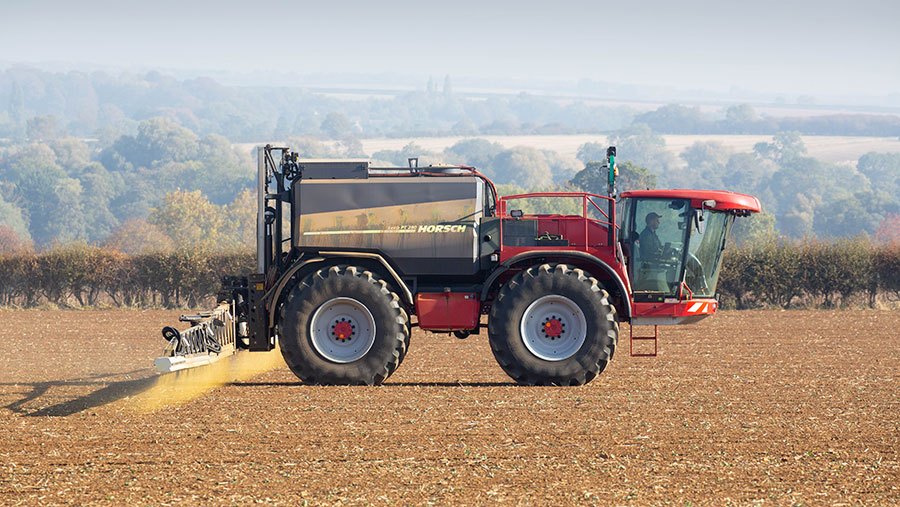 Weed control is the focus for our agronomists this week, with farmers advised to only drill when conditions allow the immediate application of pre-emergence herbicides.

Grassweeds are proving to be a problem in some crops that have already been drilled, especially where pre-emergence sprays had to be delayed because of the heavy rain in early October. Windy conditions during harvest also means there will be a greater threat from oat and barley volunteers.

I’m experiencing déjà vu – another difficult autumn. If only it was a dream.

The land is wet, but soil structure is good and, with the blessing of some dry days, drilling will continue at pace.

The cereal area already drilled varies from farm to farm depending on grower attitude to risk and grassweed populations. Some farms have very little drilled, while others have emerged crops. But several of these need residual herbicides and barley yellow dwarf virus treatments when conditions allow.

Blackgrass has flushed hard during October. Anxious growers waiting to drill either by choice or forced by conditions will see the reward of this delay, with reduced grassweeds.

Glyphosate applications for grassweed control before drilling are very important. Be ready to snatch opportunities to spray off if you can travel, but don’t get too far ahead of the drill.

Aim to keep the application of pre-emergence herbicides as close as possible to the drill, as they work best before the crop and weeds emerge.

In grassweed scenarios, it may be wise not to drill until conditions are likely to allow immediate application of pre-emergences. Remember, late October/early November-drilled wheats can yield well, as long as they are not mauled in.

Pre-emergence herbicides will work well in moist conditions, although it may not now be possible to apply Avadex (tri-allate) granules where the applicator is fixed to the rolls or where a separate application would cause another set of damaging wheelings.

Residual herbicides
As time progresses, review planned residual herbicide treatments for crop safety and adjust them according to the delayed drill date and seed-bed conditions.

However, be mindful that residual pre-/early post-emergence applications are the cornerstone of your programme; don’t rely on post-emergence acetolactate synthase (ALS) inhibitor herbicides that may not give sufficient control.

Drilling and pre-emergence herbicide applications will seem to be the priority where workloads are high and spray opportunities have to be snatched.

However, don’t underestimate the need for well-timed barley yellow dwarf virus sprays on earlier-drilled cereals at the one- to two-leaf stage. Aphid migration has been significant despite the foul weather.

Oilseed rape crops are robust with big canopies. Monitoring systems have reported a lower migration of cabbage stem flea beetle, which should be reflected in the number of larvae now hatching and entering the stem.

Where crops were planted with a companion crop, these should provide a bank of beneficial predators to target the emerging larvae. It will be interesting to see how this will affect larval populations in the spring and seed yield.

Companion crops such as buckwheat will die following the first frosts, failing that this and other companions can also be controlled by broad-leaved weed herbicides, most likely Astrokerb (aminopyralid + propyzamide).

It was always going to be difficult to stop growers from starting drilling cereals in early September after last autumn. Especially those who started drilling on 10 September, which meant they got drilled and sprayed up before the deluges started from late September and reminded me constantly all last season.

In the few crops that were drilled early last season, we did not see significant barley yellow dwarf virus infection, so we confirmed that aphids are not good swimmers. However, we mustn’t assume that we will get away with similar infection levels this season.

Compared with last autumn, oilseed rape establishment has, thankfully, been much less problematic. They have got off to a much better start, although we encountered a similar mid-September heatwave that encouraged the flea beetle into most crops, but the difference was that the rain we received at the end of August meant they were not stressed, and growing away well.

Because of resistance issues, I took the decision  to spray crops once in this period to lessen the pressure, which worked. It meant I was confident enough in crops to start at the beginning of this month with the first Belkar (halauxifen + picloram) applications for broad-leaved weed control because, while the moisture was allowing the crop to grow, weeds were enjoying the moisture as well.

Seed-beds for cereals that were being drilled in the third week in September were actually quite dry and improved after rain at the end of September. We were luckier than other parts of the country, as Storm Alex only deposited about 50mm of rain, which hasn’t stopped us drilling.

Maize and potato harvest has also progressed, so even cereals after these will be mostly drilled by the time this article goes to press.

2020 effect
We were all glad to put the 2020 season behind us, and we are already in a much better position than this time last year. Unfortunately, the ramifications of 2020 within the following crops will haunt us for a little while longer.

Wheat following open, weedy OSR crops where propyzamide applications were unable to be applied are showing significant grassweed emergence, despite robust pre-emergence herbicide stacks. These will be getting top-up applications, along with an aphicide to try to minimise barley yellow dwarf virus infections from the aphids that can easily be found in the crops.

The high winds we had at end of August means that wheat following spring oats and barley have huge amounts of volunteers, despite stubble treatments of glyphosate. The former will get some contact herbicide along with residual chemistry, while the latter are much more challenging to remove from wheat crops.

What a difference a year makes. This time last year it was a case of hunt the wheat field due to the atrocious weather. Fast-forward 12 months and it is a pleasure walking some early-drilled cereals that were direct drilled into near-perfect conditions on the Downs.

Even on the Weald with its heavy soils, the seed-beds have been excellent. A good weekend has allowed many to catch up with any outstanding spraying and drilling. However, it’s dangerous to generalise, and it doesn’t mean this autumn hasn’t been almost as challenging as the last, in some areas.

There is a not significant area of cereals and beans still to be established. Blackgrass is providing a challenge due to pre-emergence herbicides having to be delayed because of the heavy rain received in September and early October. A recent spraying window has allowed a post-emergence mix of flufenacet, mesosulfuron plus iodosulfuron to be applied where blackgrass is already at one to two leaves in places.

Aphid numbers had been building rapidly, but the recent wet weather has reduced numbers, so crops are being continuously monitored for wingless aphids in conjunction with suction trap data. The T-Sum calculation is also just one of the triggers for treatment with an insecticide.

Oilseed rape
OSR is also beginning to look much more promising than last year, with very little phoma present in crops to date. The situation will be monitored closely to determine when disease reaches threshold levels of 10% of plants showing infection.

A mix of prothioconazole and tebuconazole will be used where necessary. Flea beetle levels have generally been much lower than in recent years, and will, hopefully, lead to reduced larvae damage. Only time will tell, and crops will be monitored for signs of larvae burrowing into the leaf petioles of the plant.

One lesson the recent run of difficult weather has clearly highlighted is the need for flexibility over crop choice and rotation – particularly when using conservation agriculture principles, where we are trying to drive down production cost and improve sustainability.

The ability to access the right seed at the right time is essential and means we need to change our thinking from having a shed full of machinery to having a shed full of different crop species to suit the soil conditions and calendar date. This must be combined with the overarching goal of maintaining permanent soil cover – a vital component of the system that promotes soil health. Otherwise, we miss the opportunity to maximise turning sunlight into energy.

A few days of very heavy rain in most parts of Scotland brought field work to a halt after a superb spell of dry weather and perfect soil conditions for crop establishment.

There is still some wheat to be drilled, mostly planned after potatoes, and we will just have to wait and see if opportunities arise to finish the job.

The wheat in the ground is coming through nicely. As usual, there are fields that require monitoring for slug damage, particularly on cloddy ground or after oilseed rape, but the risk of aphids has passed now that night frosts and blustery showers are more prevalent.

Most growers have applied the autumn weed control to wheat and barley crops.

While 2020 was unusual in the late germination of weeds right through the summer, we have to be prepared for increased numbers of weeds this year and take action to reduce the seed bank. Notable late germinators included second (or third) waves of volunteer rape and fumitory.

The pressure from grassweeds is also increasing, and in my area bromes, annual meadowgrass and rat’s tail fescue are the main targets for herbicide strategies.

Volunteer control
Volunteer oats are a priority on some farms, and the wheats after oats have had a dose of clodinafop in the back end.

Oilseed rape is perhaps not as advanced as crops south of the border. The beetle damage has been a little greater than last year, but I have not had to spray, and there are now enough true leaves to cope with any beetle-grazing activity.

There has been great debate locally about the benefits of autumn fungicides, and I have now seen enough years where it did not go on to be happy to recommend leaving it out on the varieties with decent light leaf spot resistance ratings.

The aim now is to get some propyzamide onto the rape to knock out annual meadowgrass and rat’s tail fescue.