Generally, weather conditions down the east coast have been dull and damp, with very little sunshine throughout June so far. If I were a gambling man I might take a punt on yields being lower than average this year. 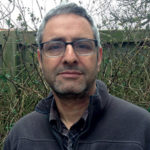 It has been warm enough though to trigger a few late blight Smith periods, although I have yet to find any blight here. As a precaution, however, I am including cymoxanil in the mix.

The West has fared a little better, with good growing conditions, albeit dry until a couple of weeks ago.

There is adequate moisture now to see most of the early chipping crops home.

Some blight has been found in early fleeced crops, however, I have yet to see it in open crops.

The slow speed at which canopies have developed has caused issues with weed control, with a number of crops requiring post-emergence herbicide applications.

Black bindweed and fumitory seem to be the main problems.

Watch out for aphids, I am catching vast numbers of Myzus persicae and others in yellow water traps and as a result, all seed crops are having “anti-resistant” aphicides included in all spray applications.

It is worth bearing in mind that most, if not all aphids show resistance to both pirimicarb and pyrethroids.