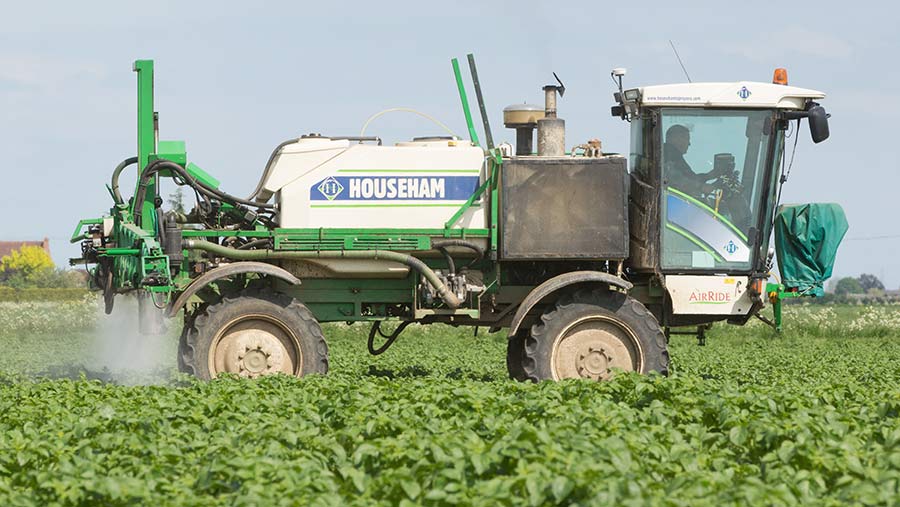 There has been a challenging spell of weather further north, with many places receiving more than enough rain for the coming weeks ahead.

Most of this rain has arrived in prolonged damp days with steady drizzle, which has allowed water to soak into beds with little soil run-off.

However, with the past two weeks being either wet or windy, spray applications have been tricky – growers are having to be ready at any point to take an opportunity to apply herbicides and early blight sprays.

This hasn’t been helped by sprayers being at peak workload, with many other crops reaching key growth stages at similar times.

The herbicides that have already been applied are working very well, with the moist soils providing ideal conditions for the optimum performance of residual chemistry.

With uninterrupted planting and potatoes emerging quickly, established weeds have generally been small, allowing some reduction in rates of contact herbicides such as diquat and carfentrazone – this has obviously been on a per field basis.

With many early crops already being on their second or third blight sprays and volunteers actively growing in surrounding fields, it is key to start blight programmes promptly.

Often the temptation is to wait that extra week once you have 100% emergence, however this can be a short-term saving for a long-term loss if the season turns against us.

Aphid flights are also on the rise and seed crops should be monitored closely, with Myzus Persicae (peach potato aphid) being found in the most northerly crops weeks ago.

The warm winter has also ensured many aphids have avoided winter kill, which warrants a robust aphid programme in seed crops.

Unless aphids reach threshold levels on ware crops, I will rely on control from the large army of ladybirds and other beneficial species that have also profited from the kind winter.

Ben Lowe is a potato agronomist at Agrovista