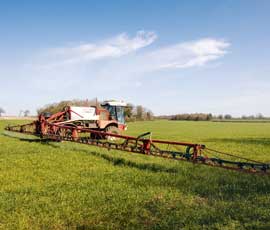 The painful decision to save or write off backward crops is top of the agenda for our Crop Watch agronomists this week.

As the settled snow melted away across the arable area this week, crop walking resumed and revealed a sorry scene in places, with oilseed rape crops under most threat.

“A grim few weeks lie ahead making those difficult decisions and it will be equally painful to try to achieve good grassweed control in fields that have received little or no residual herbicides,” says David Martindale of Arable Alliance.

“We are switching to Crawler (carbetamide) in oilseed rape crops as we have now reached the cut-off for Kerb (propyzamide). This is a last-ditch attempt to get some decent blackgrass control,” he adds.

Mr Martindale also notes the huge pressure on the already creaking post-emergence herbicides in wheat, much of which missed its ideal timing in the autumn when blackgrass was at its most vulnerable.

In the South, Agrovista crop consultant Tim Bullock is still experiencing soil temperatures of 1C, which means he won’t be applying any of his grassweed herbicides until he sees a rise.

“You need at least a week of soil temperatures at 6C and some active growth before considering application, but that’s if the sprayer can actually travel,” he points out.

The established wheat area in Mr Bullock’s area is looking good, but he explains that rooting and tiller development are going to be the most important factors in achieving respectable yield.

This has prompted him to recommend a phosphite application just before or after the first nitrogen split to assist in root development.

“Let’s hope we get a dry week before the middle or end of February to create a window to get some of it in the ground.

“When the ground does dry out, there will be a lot of catching up to do. With forward grain prices as they are it will be important we get the most out the crops we have,” Mr Potts says.

How bad do things have to be to sacrifice a crop? In the blackgrass hotbed of eastern England, Philip Vickers of Farmacy may spray off some wheat crops where an autumn herbicide was not applied and the troublesome weed has established itself.

“Glyphosate may be the best option, giving good blackgrass control and an early entry for the oilseed rape crop next year,” he says.

Backward crops with a lower weed burden are going to be pushed on by an early nitrogen application.