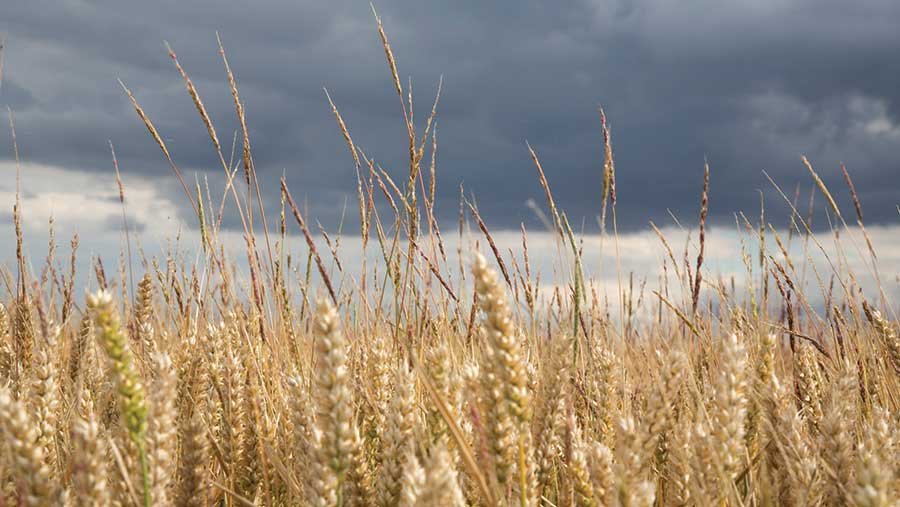 With spring weed control uppermost in growers’ minds, Louise Impey looks to see if there any opportunities to trim herbicide costs after such a mild winter, or are the weeds too big and too plentiful.

Wheat growers with more grassweed survivors to tackle this spring than last year have a challenge this season if they are looking to bring herbicide expenditure down.

While autumn residual herbicide did not work as well as they did in 2014, there were a number of growers who found that wet weather made it difficult to go back again with a contact herbicide before Christmas.

See also: 5 figures to show how much growers rely on glyphosate

The result, agree agronomists, is plenty of well-sized weeds, which have been boosted by the mild weather every bit as much as the crops.

Where weeds have benefited from this early advantage, Zantra’s technical director Chris Bean advises growers to make an assessment of their size and numbers before deciding on their spring strategy.

“The worst case scenario is that the mild, wet weather has encouraged high numbers of large grassweeds. In those situations, it might be cheaper to bite the bullet, get rid of the crop and start again,” he says.

Alternatively, bad patches of blackgrass can be sprayed off, rather than whole fields, to prevent its spread and limit seed return.

“Providing it’s done any time before the blackgrass reaches the heading stage, it will be effective. In the meantime, you can stop spending on those areas,” he says.

Where there is a lower level of blackgrass, the decision on whether to go ahead with spring-applied Atlantis is the tricky one, he acknowledges.

“If weeds are still small, there may be some point in looking at an older, cheaper herbicide instead. Clodinafop at appropriate rates and in mixtures has given surprisingly good results at Zantra trials sites, where the active hadn’t been used for the last 10 years,” he says.

Mr Bean says if growers accept they may get about 30% control from this treatment, then they can see if it’s worth doing. Where 85-90% control was achieved from the residuals, then it probably can be justified.

Of course, Atlantis will also control other weeds, such as cleavers and mayweed, providing they aren’t getting too big, he adds.

As the spring develops and the weeds get bigger, Mr Bean suggests that it may be worth switching from Atlantis to Pacifica.

“You get slightly better blackgrass control from Pacifica as you move into spring, due to the higher amount of active ingredient,” he says.

Whichever is used, it is possible to use a cheaper adjuvant than the manufacturer often recommends.

“We’ve used Boost for the last two seasons and seen improved weed control – as much as 7-15%,” he says.

Mr Bean also recommends the use of a water conditioner in hard water areas, at a cost of £1-£2/ha, to prevent any lock up of the active ingredient.

Other tips for getting the best value from Atlantis is to treat crops at the right time, making sure there is active growth before spraying commences, and also use flat fan nozzles in preference to low drift ones.

There’s also no point in adding a residual to Atlantis where crops are thick.

“It’s fine in the autumn. But it will save £9-£11/ha by leaving it out in the spring, plus there’s an antagonism risk with big weeds,” he says.

Take heed of a manufacturer’s advice on tank mixing especially if spraying is delayed – some plant growth regulators and definitely chlorothalonil will interfere with the activity of Atlantis/Pacifica.

“That’s not good news when you need to get every percent of control possible from the product,” he says.

Stale seed-beds are essential for dealing with a problem grassweed population in spring cereals.

“Get rid of the problem with glyphosate before you drill. Don’t be tempted to use a residual after drilling, unless you really can’t do it any other way. If it goes dry, it’s a waste of money,” says Mr Bean.

As far as crop choice goes, spring barley is much more competitive than spring wheat, while later drilled crops such as beans and linseed, allow more time to kill of those weed flushes, he adds.

Providing crops can get away quickly, they will out compete any remaining weeds.

“So seed-beds need to be good – there’s no point in rushing these crops in,” he says.

With varying levels of resistant blackgrass across the 400ha of combinable crops that he manages at Squab Hall, he is wondering whether a different approach is required at current grain prices.

In his worst winter wheat fields, he is spending £120/ha just on blackgrass control.

“Although the pre-emergence materials still seem to giving us a return on our investment, the same can’t be said of the post-emergence herbicides,” he says.

Mr Fox was able to avoid using any Atlantis on his winter wheat last year, having achieved very good results by combining cultural control methods with a stacked pre-emergence programme.

“We need to be getting at least 95% control from the pre-emergence treatment just to stand still. We are also using Avadex, which adds another 5% control, but for an extra £35/ha, we are questioning whether it is worth it,” he adds.

At least these pre-emergence materials are still working, especially when the conditions are in their favour.

“It’s the post-emergence choices, such as Atlantis, Laser and Aramo, which have lost their efficacy as resistance has spread,” he adds.

However, having acknowledged that Atlantis has lost its shine, Mr Fox hasn’t dismissed using the herbicide on some fields this spring.

“It’s a decision that still has to be made, as we didn’t manage to get back into crops in the autumn with a follow-up spray. Certainly we will be treating some of the headlands where there are problems, as Atlantis controls other weeds too,” he says.

His dilemma is that an Atlantis treatment will cost £35-£40/ha. It’s a cost that he would rather not be faced with, especially as he has been able to do without it before.

In the past, Mr Fox has been prepared to take drastic action to beat blackgrass. In 2011, he sprayed off a 5ha block of winter wheat, following it with three years of spring crops, before reintroducing winter oilseed rape.

“It’s a different situation in oilseed rape, as we have  hree herbicides – Centurion Max, Kerb and Crawler – that still give good results in the right conditions. But the costs of control in rapeseed have risen to £110/ha,” he says.

“The rotational changes came about because blackgrass is most difficult to control in winter wheat. Spring crops let us make very good use of stale seed-beds to remove flushes of the weed before drilling,” he says.

Ploughing is not being done at Squab Hall at the moment – but Mr Fox is open-minded about its future use for reducing blackgrass pressure.

“Direct drilling is another possibility. Certainly where we scratched a bit of oilseed rape in last autumn, there’s been a slight benefit of lower weed numbers. Of course, that may be because it allowed the Kerb to work better,” he adds.

His other commitment is to clean all the machinery down thoroughly, to prevent the transfer of blackgrass seed.

“We’re trying to be more rigorous and have been known to turn dirty balers away. All the kit has to be properly cleaned before it can move from one area to another, so that we limit any seed spread,” Mr Fox says.