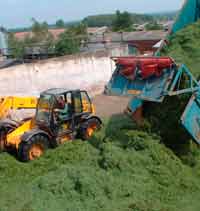 The standard Feed into Milk figure for degradability has in the past been 62%, but after trials by Frank Wright Trouw Nutrition it revealed this is 10% greater than that measured in the average maize silage of 2008-09.

“It’s important if farmers are not getting maize silage tested for degradability that they use the 52% figure and not 62%. This is a big range and if you over-estimate degradability this will have a huge effect on energy supply to rumen bugs,” said Dr Allen.

However, maize degradability can alter significantly even within the few months maize is in the clamp.

“After four months in the clamp, moisture softens the maize kernel, changing the rate at which the starch degrades and this then becomes an energy source for the rumen microbes. This may result in cows showing increasing signs of acidosis as winter progresses, without apparent changes in diet.”

Dr Allen advises farmers, where maize forms a significant part of the ration, to test a sample at the start of the season and four months later, in order to assess the change in starch degradability in the clamp.