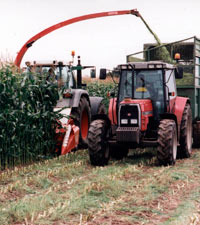 Cobs brought into their cob clinic at the Dairy Event and Livestock Show, showed those from the east were less developed and smaller.

“Dry and warm weather at sowing resulted in a slow establishment. Also, when weed control was applied the dry weather meant it didn’t work as well, resulting in lower yield potential,” he said.

In stark contrast, the west is seeing some good crops, despite a wet summer. “Rainfall throughout summer means there has been some good vegetative growth. They are, however, greener with smaller cobs and this will result in lower starch yields,” said Mr Richmond.

However, caution of further wet weather in the north could see many farmers harvesting before cobs have reached full maturity.

“You want the cobs looking golden and not milky and some may be tempted to harvest early to avoid the weather. My advice would be to leave it as long as you can practically so you can get as much starch as possible but keep a sensible eye on the weather,” he said.

Technical advisor for David Bright Seeds, Jack Torrens, also urged farmers to leave maize as long as possible to maximise starch content. “With the wet weather lowering the energy content of grass silage this year, this makes it even more important to get the maximum starch and metabolisable energy from the maize,” he said.

From the cobs Mr Richmond has seen, he reckons harvest will be late again this year, with many beginning harvesting in mid October.

But a later maize harvest could leave many farmers questioning what to plant next year. There are various options, according to Mr Torrens, but it all depends on the area and when the crop is harvested.

He said Italian ryegrass direct drilled as soon as maize is off in favourable sites would produce a reasonable cut in early spring and would allow spring maize to be drilled after.

“Italian Ryegrass is a good option if time is not in your favour and if planted by mid-October the crop should be fine.”

Kingshay technical specialist, Catherine Woods, also said catch crops can be helpful if stocks of quality forage are looking short for the winter, but warned selecting the correct grass varieties was vital.

“Choosing cheap varieties may reduce establishment costs, but poor spring growth, dry matter yields and poorer quality grazing can soon negate this small cost saving. However, going for a one year Italian ryegrass ley will give you bulky cuts early on,” she said.

Mr Torrens also said catch cropping with stubble turnips was an option as long as it is drilled by mid October.