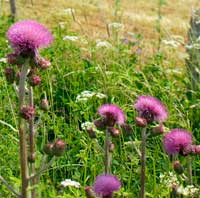 Ideal grass growing conditions with continuing wet, warm weather in certain areas of the country, offer farmers an opportunity to treat weeds such as thistles and docks this autumn, said weed specialist, Duncan Connabeer of Dow AgroSciences., speaking at the Dairy Event and Livestock Show.

“If producers didn’t manage to spray their grassland weeds in the spring, they can do so now, and may achieve even better control,” he said.

“At this time of year, plants are drawing nutrients down into the roots rather than directing their efforts into producing a seed head – this allows the herbicide to work more effectively.”

Autumn weed control can be just as effective as spring application, as long as the weather holds, agrees independent grassland consultant Charlie Morgan.

“In the south, autumn weed control in grass will work well during September and maybe even October, but it is essential plants are healthy, at the same growing stage and actively growing.

Somerset dairy farmer David Cotton prefers to spray for docks and thistles in early autumn after topping the fields twice in mid to late summer.

“I get much better kill from spraying in September – it is much easier to see the weeds at this time of year, meaning I can target applications more tightly.”

But, where clover is in the sward, producers need to weigh up how much grass production they are losing from weeds against the contribution clover is making.

This is something to consider when establishing new leys, said Helen Mathieu from British Seed Houses.

“Seedling docks and annual weeds can damage re-seeds so weed control is essential. However, there are no clover safe sprays for use at this time of year, so farmers must weigh up the pros and cons of leaving clover in or out of new leys.”

“When anticipating a weed problem in new swards, it may be more effective to exclude clover now and oversow clover in the spring to allow autumn weed control.”