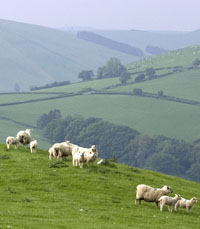 The Farmers Union of Wales has claimed that DEFRA’s long-term vision for CAP change would decimate Welsh farming businesses.

Gareth Vaughan, union president, reacting to a report on a comprehensive independent analysis of projected policy changes, said it confirmed the FUW’s view that these will lead to be massive falls in livestock numbers and commodity prices by 2018.

“We have been raising concerns since DEFRA’s vision document was published in 2005 and this new report confirms what we have been saying,” said Mr Vaughan.

“The proposals, if allowed to go ahead, will rip the heart and soul out of Welsh rural communities and completely destroy what little food security we retain.”

Livestock numbers would fall with serious consequences for farm incomes and the environment. Many businesses could close with the loss of thousands of jobs.

The new analysis* was done by Queens University, Belfast, the Northern Ireland Agri-food and Biosciences Institute and the Food and Agricultural Policy Research Institute of the University of Missouri.

Mr Vaughan said that in essence it predicted that Defra’s plans would result in a 197% increase in non-EU beef imports, leading to a 29% fall in Welsh suckler cow numbers and a possible 25% fall in the beef price by 2018.

There could be a 19% decline in the breeding ewe flock and a 9% fall in sheepmeat prices.

Also, the phased increase and eventual abolition of milk quotas would have a depressing impact on projected milk price and production in Wales.

There could be falls of 6% fall in pigmeat prices and 9% in poultry prices.

In evidence to the Welsh assembly’s rural affairs sub committee, Mr Vaughan described the DEFRA document as “a vision for the destruction of UK agriculture”.

The new analysis looked at the impact of five scenarios:

The impact of each was plotted against a baseline linked to what was likely to happen with no CAP changes between 2008 and 2018.

The authors concluded that while the Health Check reforms would have a minimal impact on agriculture in Wales, the consequences of implementation of Defra’s Vision proposals for the Welsh beef and sheep sectors in particular would be dramatic.

*Impact of HM Treasury/DEFRA’s Vision for the Common Agricultural Policy on Agriculture in Wales.