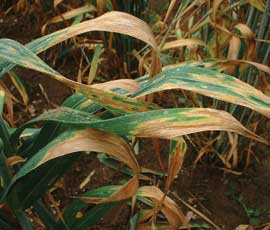 Wheat growers are being warned to watch out for septoria and fusarium after recent rainfall, despite a generally moderate disease pressure season.

Septoria is one of the biggest concerns with growing signs of infection evident on the lower leaves. Losses of up to 50% have been reported in previous seasons in severely affected crops.

“Most of the crop’s yield comes from the top two leaves and the ear, so protecting these are vital,” said ADAS senior research scientist Jonathan Blake.

Fungicides applied after ear emergence will provide protection to the upper leaves and also the newly emerged ear against foliar disease and specific ear disease, he added.

Mr Blake highlights the T3 fungicide ear spray will be as important as ever this year and warns growers not to rest on their laurels especially in the wetter west.

“In the west we have always had high disease pressure and so we are fairly used to dealing with it and applying robust rates,” said Mr Blake from his base in Herefordshire.

Over in the east, I think growers may have been lulled into a false sense of security, particularly as septoria is a lesser threat over there, he added.

An ADAS open day in Brockhampton, just south of Hereford, allowed Mr Blake and fellow researchers and agronomists, to show the potential problems if a robust spray programme is not carried out.

“In the untreated areas, septoria has come through as a real problem and crops are still some way off grain filling,” he said.

The disease on the lower leaves will probably mean there is a latent infection on the upper leaves which won’t actually be visible for another three weeks, he added.

Despite the majority of yield coming from the top two leaves, Mr Blake pointed out the lower leaves can still play an important role particularly in the thinner crops.

Fusarium is another key issue growers need to be wary of in the coming weeks with wheat ears now emerged.

“Growers need to be getting their T3 fungicides on but the difficulty people have is a lot have only just finished applying their T2’s. So going through it again because the ear is out and starting to flower is not ideal,” He said.

Mr Blake advises growers to go on when the majority of plants are at early to mid flowering in order to get the best control.

“You’ll never get complete control but you might get 50-60% which should be enough to protect the yield,” he added.

Tim Nicholson, commercial technical manager at Bayer CropScience, said septoria has been much less prevalent this seaseon probably due to the cold spring.

“It’s not as prevalent as usual just yet, but we are in the higher septoria area here so going with a more robust rate is important,” he said.

The SDHI chemistry have really proved itself this year, not only in disease control but the physiological effects as well, he added

“As long as you have got 400 ears/sq m, and we get some sunshine in June and July with some moisture about then we should see some respectable yields,” he added.

BASF technical advisor Colin Mountford-Smith said growers should also be on the lookout for rust at the T3 fungicide timing.

“Disease will be very localised. The potential for every crop is very different, so I think it will be about knowing which crops to push and which ones not to spend too much on.” he added.

According to Mr Mountford-Smith, triazole fungicides generally give about six days of protection and so one spray should be sufficient in a normal five to six day flowering period, but if flowering is extended then a follow-up spray may be needed.