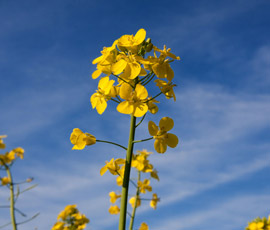 Backward oilseed rape crops have delayed the threat of sclerotinia, but growers are urged not to wait for the disease to strike. Luke Casswell finds out the latest advice for growers this season

Sclerotinia can cause up to 60% yield loss per plant and, with growers relying almost primarily on protectant sprays rather curative ones, experts warn growers not to be caught out by the disease.

Mark Hemmant, technical manager at Agrovista, maintains that if you find any signs of the infection, you are probably already too late.

He advises growers to plan ahead and consider the threat from other diseases such as alternaria and light leaf spot, when selecting a suitable fungicide. “Growers need to start thinking about treatments at yellow bud time, just as it’s about to come into flower. Many will be looking to top-up their light leaf spot control with a sclerotinia spray.

“You have to spray fungicides as protectants, so they have to go on before the infection, and remember they only last up to three weeks,” he explains.

Although a 60% yield loss per plant is unlikely to be representative across a crop, it does show the nature of the disease and the importance of control. Mr Hemmant highlights that if sclerotinia infection occurs early on, it can be particularly devastating to yield, and it is the timeliness of control that is critical.

Previous cropping will need to be taken into account, and those who have had recent oilseed rape, bean, and potato crops are all urged to be extra vigilant.

Oilseed rape plants typically flower for around six to eight weeks, and this means that the only way to protect the crop during the flowering period is to spray it more than once.

Peter Gladders of ADAS says the amount of backward crops and the late season will mean shorter flowering periods in oilseed rape this year.

“We will probably see a period of around four to six weeks this year rather than the more usual six to 10 weeks, when flowering starts in early April,” Dr Gladders says.

“This means the pressure will be on as there will be a much shorter window for getting on with the sprayer,” he adds.

Mr Hemmant highlights many modern fungicides that give sclerotinia protection can also give a yield response without sclerotinia being present.

“A strobilurin at yellow bud early flowering, can give you a yield response whether you get the disease or not,” he says.

“This will also cover you to mid-flowering when you can put on a bespoke sclerotinia fungicide to take you through another three weeks,” he explains.

Mr Hemmant stresses that with oilseed rape at around £400/t, a yield response of 0.1t/ha or 0.2t/ha, even without the disease, will make the fungicide an option.

Another option at yellow bud stage would be metconazole or tebuconazole plant growth regulators, which would offer the benefits of canopy manipulation as well as sclerotinia control.

Making the right choice will be essential for many growers, particularly those who are choosing to go for a one-spray programme.

Mr Hemmant explains that growers are able to use night-time weather forecasts to help implement such a programme.

“Sclerotinia won’t infect the crop if the night-time soil temperature is below 7C [45F]. So if you’ve got consistently low night-time temperatures you could risk only applying one spray,” he maintains.

Proline (prothioconazole) is one of the main sprays against the disease, giving good control and reasonable yield response.

Experts suggest this could be the most popular spray this year, given the fact it targets light leaf spot as well.

Mr Hemmant highlights other diseases as playing an important role this year with regard to fungicide choice, and any growers will look to top up their light leaf spot control with a sclerotinia spray.

“Light leaf spot will be a big consideration and so will alternaria if it is wet, so I think if growers can tackle these as well as sclerotinia they will,” he says.

“If you have got stressed crops or early-sown crops, then powdery mildew may be a real problem. It may not have a big yield impact, but it can cause problems come harvest with machines,” he says.

Preventing the build-up of sclerotinia next year will have to be taken into consideration, according to Dr Gladders.

“Even late sclerotinia, which has little effect on yield, can increase the following years risk. Growers must take this into account and be prepared to invest a little to prevent future build-up on the farm,” he adds.

Of the new products on the market, Recital (fluopyram + prothioconazole) contains an SDHI fungicide that is good on alternaria, powdery mildew and sclerotinia, says Mr Hemmant.

“This has looked better in our trials than Proline giving a 0.2t/ha response in its first year of being available,” he adds.

The ADAS/BASF monitoring service has been extended to include a postcode outlook for the new 2013 season and could provide a key tool in the fight against sclerotinia.

Growers will receive a local colour-coded outlook and regional guidance based on the likelihood of sclerotial germination.

The service is designed to give the grower or adviser a view of how the sclerotinia risk is shaping up and can be accessed for free via www.totaloilseedcare.co.uk

Germination assessments are made each week for a 12 week period; and results are updated every Friday on the website.