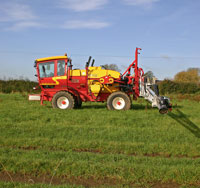 Key grassland herbicides, which have been found in raw water supplies above the legal drinking water standard, could threaten their future use, according to The Arable Group’s Jim Orson.

Speaking at a recent Voluntary Initiative workshop, he said if they continued to be found at high levels there was a chance they would come under tighter regulation under the Water Framework Directive. Therefore, producers needed to improve the way in which they used these products, Mr Orson warned.

MCPA, clopyralid, mecoprop and 2,4-D were all found at high levels in the summer when livestock farmers would have used them, he explained.

But it wasn’t necessarily just down to irresponsible use; part of the problem was some of the most popular and cost-effective hormone products were prone to leaching into watercourses, he stressed.

MCPA and 2,4-D were relatively cheap products that gave good dock control when used annually. “So you can see why they are popular,” he said.

However, some of the products had a propensity to move to water, including MCPA, clopyralid and aminopyralid. Mr Orson said conscientious stewardship was required to minimise the risk of these products reaching watercourses.

In addition, using products less likely to find their way into watercourses would help as would using products with lower levels of active ingredient in them, he said. “The risk to water is possibly a lot less with these.”

Thifensulfuron was recommended at even lower doses and in addition was less likely to move to water, he explained.

But, although different chemicals could help lower the propensity to move to water, good management practices can also prevent herbicides leaking in to watercourses, says Masstock Arable’s Charlie Prince.

“One foil seal from a container accidentally finding it way in to a watercourse could breach water quality standards in a 30km stream, because the herbicide is so concentrated,” he says.

This is why it’s crucial farmers take every step to minimise herbicides entering watercourses.

“Herbicides can leak in to water when storage isn’t correct, when chemical is spilt, or when sprayers aren’t up to standards, as an example. Checking sprayers prior to use is fundamental making sure there are no leaks, nozzle flow rates are correct and are calibrated so application rate is also correct.”

Over-spraying should also be avoided at all costs and Mr Prince recommends implementing a 6m grass buffer strip by watercourses or operating a 5m no-spray zone.

It’s also important to realise large quantities of herbicides can also get into watercourses when cleaning the sprayer and also when they are applied in incorrect conditions, adds Mr Prince.

“Applying in correct conditions not only helps prevent leaching of herbicides into watercourses, it will also help them work better and will save money. It’s important nothing is applied when soils are cracked, dry or saturated with water.

“Fields should also contain plenty of grass to take up the chemicals and don’t spray on to soils directly,” says Mr Prince, who also recommends looking at the weather forecast before applying making sure no rain is likely within a 48-hour period after application or when it’s windy.

“When herbicides are applied in correct conditions, at correct timings and at the correct does rates, the herbicides will work better,” he adds.

Do agchems found in watercourses place a question mark over voluntary regulation? Have your say on our forums