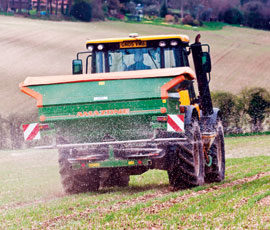 Some growers (see Farmer Focus, p68), are keen to apply early nitrogen due to concerns over the possibility of another dry spring, resulting in poor nitrogen uptake.

But agronomists say that could cause greater management challenges later in the season.

“Remember that less than 5mm of rain is required to initiate fertiliser uptake, and the law of averages would suggest that we would get that at some stage during March and April,” says Patrick Stephenson, AICC agronomist in Yorkshire.

“More nitrogen going on early in wheat can cause more disease and lodging prone crop structures with much more straw.

“Winter barley, particularly malting and hybrid varieties, would be the exception as it responds well to a higher dose of early nitrogen. Also, second or continuous wheats where take-all needs to be addressed could have an earlier application,” he adds.

Nitrogen applications should be made through informed decisions based on information such as soil mineral nitrogen (SMN), crop nitrogen and weather conditions.

“Knowing what you have to start with is the key to any decision making,” says Will Foss of Agrii, based in Cambridgeshire.

“Much of the available nitrogen has been taken up into these forward canopies that we are seeing, resulting in variable results from soil analysis of SMN.

“With the risk of further drought there is a temptation to get nitrogen on early where there is low SMN underneath the crop,” says Mr Foss.

Where there is a concern with drought the first split application could be increased, says Mr Foss. “But where there is a lush canopy and nitrogen is available that dose can be cut or delayed,” he adds.

Stephen Harrison, AICC agronomist from the south-west of England, agrees.

“You could possibly bring the timing forward to late February in poor crops, but only in very extreme cases,” says Mr Harrison. “The total amount of nitrogen going on is far more important than timings, so long as it goes on when the crop is growing and in the right conditions,” he adds.

Where early nitrogen is applied to lush wheat crops, robust plant growth regulator (PGR) programmes will be essential. Many varieties being grown are susceptible to lodging or have not been truly tested in a lodging year.

Growers should consider adding a PGR to the T0 fungicide timing to strengthen rooting and stems, says Mr Stephenson.

“It is a cheap and cost-effective insurance policy against lodging, and I’ll be advising a split application of chlormequat at T0 and T1.”

Distributors are warning about possible shortages of chlormequat, he notes, so growers should consider alternative strategies.

“Moddus (trinexapac) or Canopy (mepiquat + prohexadione) are more expensive than chlormoquat, but they have good rate flexibility and can manage the crop as effectively,” he suggests.