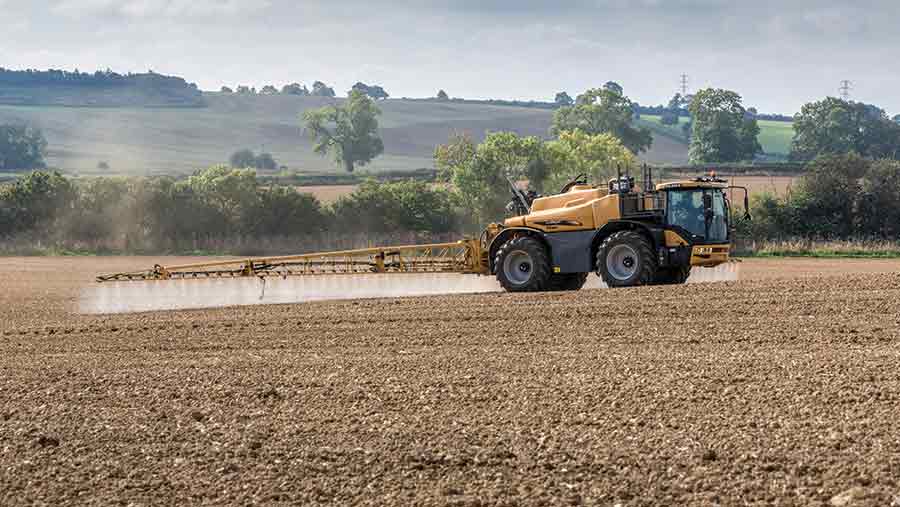 Growers who used a robust and well-timed pre-emergence herbicide are set to reap the benefits this spring, if they can get a post-emergence spray on soon to take out survivors thriving in the mild winter.

At a weed screen trial site in Chishill, Cambridgeshire, Bayer’s development manager Gordon Anderson-Taylor has been analysing the level of control various pre-emergence sprays have given.

The trial features a wide spectrum of weeds, from bromes and Italian ryegrass to blackgrass with varying stages of herbicide resistance.

Dr Anderson-Taylor says the 2015-16 season has been fairly “middle of the road” for blackgrass dormancy, but says growers shouldn’t get too obsessed with this when trying to plan the ideal herbicide offensive.

“Growers sometimes look to modify their blackgrass control programmes depending on whether the season has been labelled as a high or low year for dormancy.

“While it is certainly valid science, I don’t think growers should be altering what they do on farm to control the weed population they are facing. After all, it is very much down to the individual field conditions.”

The entire trial plot was drilled with weed seed on 11 October and the various pre-emergence sprays were then applied eight days later, reflecting practice on nearby farms.

He says pre-emergences have generally performed well this season because many growers were able to drill into quality seed-beds with good moisture levels.

The aim is to apply a pre-emergence within 48 hours of drilling, he says. Any later and it can dramatically reduce the efficacy of the chemistry – but he recognises this isn’t always possible.

The trial saw Liberator (diflufenican + flufenacet) applied at a standard rate of 0.6 litres/ha. Various other herbicides were then added to compare the level of control they bring.

“Using just Liberator at 0.6 litres/ha has given 60-80% control this year, which is pretty good,” says Dr Anderson-Taylor.

Results at the Chishill site show the addition of another diflufenican product applied with a standard rate of Liberator gave an extra 3% control on average this year.

“The inclusion of a diflufenican product has shown benefits this year and I would say the extra cost is worth it.”

Alternatively, including a pendimethalin product in a pre-emergence spray is still an option, but can result in performance issues when applied to certain resistant blackgrass strains, so he stresses the importance of choosing an appropriate mix to deal with known herbicide-resistant weeds on individual farms.

For a more reliable pre-emergence defence, he advocates Liberator at 0.6 litres/ha mixed with Defy (prosulfocarb) at 2 litres/ha.

“This mix has shown to be one of the most consistent over the years in terms of efficacy and you can see that again this year. Then there is the use of a three-way mix of Liberator, Defy and Hurricane (diflufenican). You would only need a few plants/sq m to be taken out by the Hurricane to justify the extra expense,” he says.

Having given a good level of control this season, Bayer combinable herbicides product manager Ben Coombs says the importance of the pre-emergence is clear to see, particularly with regard to broad-leaved weed species.

He explains that many growers have been largely successful in holding back broad-leaved weeds this year because of the move towards pre-emergence sprays with products such as Liberator for a large area of the winter cereal cropping.

“Broad-leaved weed species have generally been kept in check. Some of the mixer partners, particularly diflufenican and pendimethalin, will give good boosts in control.”

But he warns even if growers aren’t seeing much of a weed population at present, they should stay vigilant, as many will germinate as spring arrives.

If growers are facing a broad-leaved weed onslaught this spring, Mr Coombs says Atlantis (mesosulfuron + iodosulfuron) still gives good results, but there are other sulfonylurea herbicide options for standalone treatment.

“Cleavers is particularly yield robbing, however it is at least relatively straightforward to deal with compared with blackgrass. Any product containing amidosulfuron, such as Eagle, can be used once cleavers appear in the crop.”

Having grown through an unseasonably mild winter, Dr Anderson-Taylor says weeds are further forward than normal and reiterates the importance of getting a post-emergence spray on as early as possible.

“The warm weather means there are some big weeds out there so where a pre-emergence wasn’t applied growers will likely be facing some very big blackgrass plants. Growers need to get on with a post-emergence spray as soon as conditions allow.

“There are some lush crops out there and that may help smother the blackgrass, but when the crop is growing well, the blackgrass is too.”

He recognises that crop disease levels are high this year and growers will be thinking hard about fungicide timings, but says it is vital that a post-emergence spray isn’t left until it is too late.

In the video below, David Felce, application technology expert of Midloe Grange Farm and Agrii, discusses the key factors in the application of Atlantis in the spring.

He lists timeliness, boom height, speed and nozzle type as just some of the factors that make an effective post-emergence herbicide spray.