Oilseed rape on one Dorset farm has averaged a good yield of 4.4t/ha, helped by good spring sunlight as the area escaped the dry autumn and spring seen further east.

Farm manager Scott Bagwell has just finished cutting 138ha of the conventional variety Elgar, which started with yields of 4.2t/ha, but increased to as high as 4.9t/ha on more fertile land. 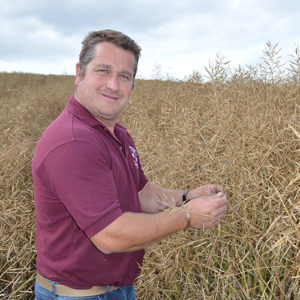 “We had very good establishment in the autumn, a mild winter and the crop was almost too vigorous,” he told Farmers Weekly.

Mr Bagwell started cutting rapeseed on Saturday 8 July and finished a week later on Saturday 15 July on the 860ha he manages based at Field Barn Farm, Winterborne Whitechurch, some six miles south-west of Blandford Forum.

Average yields on his chalky soils have ranged from 3.8t/ha to 4.5t/ha over the past few years, and he had budgeted for a 4.2t/ha yield.

Mr Bagwell said rapeseed is often the farm’s second most profitable crop after winter oats grown for Jordans, and ahead of milling winter wheat and malting spring barley.

The area’s rainfall is about 925mm – higher than the East of England, where in some parts of Essex it can dip below 500mm.