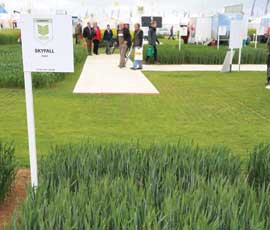 A new high-yielding breadmaking wheat with good disease resistance plus a farmer-friendly oilseed rape are two key varieties from French breeder RAGT up for recommendation this autumn.

“French breeders tend to focus on fusarium, as it is a bigger problem there,” said RAGT wheat breeder Celia Bequain.

“With three years of baking testing, it looks like a potential breadmaker. At nine out of the 10 sites, it had a higher hagberg than Solstice and has delivered a high protein content of 12.4%,” she added.

A potential yield of 101% could put it ahead of current Group 1 wheats Crusoe, Gallant and Solstice.

“Another key advantage is the combination of orange wheat blossom midge and Pch1 eyespot resistance and it would be the only breadmaker offering this,” Ms Bequain said.

The Pch1 eyespot resistance gene is also associated with a higher protein content. “This means even in a difficult season, it is more likely to meet the milling specification,” she added.

Its early maturity rating puts it between Gallant and Cordiale. RAGT managing director Simon Howell said that it equated to about half a day before Cordiale, making it a useful variety for an early entry for oilseed rape.

“Cordiale accounts for about 5% of the market and its continued success is based on this early entry,” he said, adding that he believed Skyfall could fill that role.

The variety is still undergoing Nabim evaluation for breadmaking and will be the first one to go through the revised system, with 120 tonnes of the variety going through a commercial mill and baking tests this autumn. The results are due out next March.

The second candidate from the RAGT stable is Icebreaker, a hard milling Group 3 feed wheat offering a yield of 105%, which the firm said places it with the “barnbusters” such as KWS Santiago.

Ms Bequain highlighted that it is a true early drilling variety and can be drilling in first week of September.

“It grows slower in the autumn so doesn’t get too far ahead and it doesn’t rush through the growth stages in the following spring. Being late maturing, it has an extended grain fill period giving extra yield.

“It is like Grafton, but with a 5% lift in yield,” she added. Like Skyfall, it has both orange blossom midge and Pch1 eyespot resistance.

Another variety Solace offering a high disease resistance package with a 7 for septoria and 8 for mildew, yellow and brown rust, and eyespot.

Mr Howell sees it as a perfect partner variety to the high yielders like Torch and Santiago that need extra attention.

“It’s a perfect partner with the high yielders giving growers the flexibility to concentrate on them, as it doesn’t matter if you are a day or so late with applications,” he said.

It is currently under evaluation for the Group 3 market options – biscuit, distilling and export. It is good for foliar disease with a 9 for yellow rust, 8 for mildew and 6 for septoria.

A spirited newcomer to the oilseed rape world