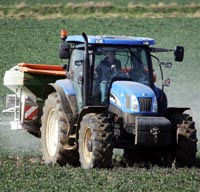 Fertiliser prices have changed dramatically as the extraordinary 2008-2009 fertiliser season approaches its final quarter and the usage period draws near.

Farmers had hoped for a respite from higher prices, but the industry didn’t expect it to happen. More­over, many faced with inventories built during the period of high costs were quite anxious that prices should remain stable otherwise sales would be made at a loss.

But if ever proof were needed of a truly global market, GrowHow Nitram (34.5%N) has dropped to £325/t in February, in response to international urea prices of £300-310 on farm. Modest tonnages of urea at this price are reported here, with importers dabbling in the market, cautious because the nitrogen season is largely over and the remaining market size is unclear.

As far as manufacture of nitrogen is concerned, the high cost of European gas has resulted in the shutdown of 20m tonnes of capacity in France, Poland, Bulgaria, Russia and the Ukraine. GrowHow, too, has shut down at both Billingham and Ince and is relying on imported ammonia to to fulfil new orders, its existing orderbook having been filled.

Ken Bowler, GrowHow’s marketing manager, is anticipating a drawn-out usage season, with most demand from the grassland. “I still believe that 1m tonnes of fertiliser is still required this season” he says. “But grassland farmers are still showing price resistance, even at these lower prices.”