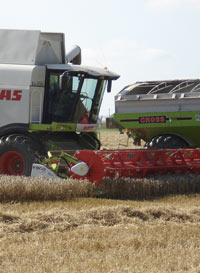 Just three weeks ago harvest looked desperate for growers in the north and west. Persistent rain in late July and early August had battered crops, leading to concerns that it would turn into a repeat of last year’s washout.

But the weather improved for most growers before yields and quality were too badly affected, and allowed them to catch up with the rest of the country.

For former Scottish barometer farmer John Hutcheson, Fife, the first dry day came on 9 September and when he spoke to FW, it hadn’t rained since. “We were well behind, with 980 acres left to cut,” he said. “The weather improved just in time and we managed to finish the main crops on 18 September.”

Bringing in a neighbour’s combine increased the work rate to more than 40ha a day and the biggest issue was handling all the grain coming into the yard, he said. 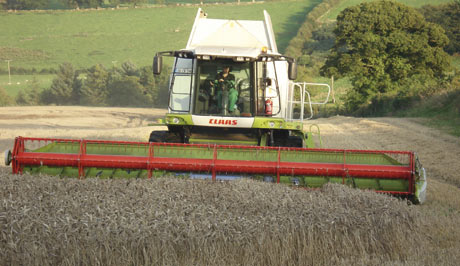 Some wheat had sprouted and Firth spring oats, grown under contract for Quaker, were being tested for groat discolouration. But apart from that, quality didn’t seem to be an issue.

Viscount was the highest performing wheat, achieving 10t/ha, but was the most prone to sprouting. Robigus sown late after beans achieved 8-9t/ha and Alchemy gave the poorest yields, averaging 8t/ha. Some malting barley was rejected as germination slipped into the low 90s. However, only four loads out of of 60 were affected.

In Devon, Troy Stuart’s harvest had been “miserable” but the dry spell allowed him to finish on 14 September. “The advantage of this year over last is that quality is okay – bushel weights are in the 70s, compared with low 60s last year, and we haven’t had as many sprouted grains.”

Alchemy and Istabraq yields were above average at 9.2-9.4t/ha. “But everything had to go through the drier and I thought we were doing well when we got down to 18%,” he said.

Two weeks of dry weather allowed Richard Kane to finish his harvest near Londonderry, Northern Ireland, last week, except for 10ha of Westminster spring barley, which was waiting to be cut by a Case Axial Flow demonstrator working its way up the region.

Feed wheat yields were average at 7.5t/ha, but 16ha had been lost due to very wet weather in the winter. This was replanted with Westminster spring barley, which achieved 8t/ha. “Stormy weather two weeks ago caused a few heads to brackle over, which affected yield slightly.” Oilseed rape yields were disappointing at 2.5t/ha, he added.

The decent weather allowed most farmers to finish combining in the South West, said West Country Grain’s marketing manager, Ian Eastwood. “We did get left behind somewhat, but the better weather has enabled a lot of people to catch up.”

But in Northumberland the dry weather came too late to save Stephen Davison’s harvest near Morpeth. “Crops looked good in the spring, but massive storms in July and August flattened 90%,” he said.

Failure to plant in sodden autumn conditions meant his only crop was 85ha of spring barley, which he started cutting on 27 August and finished on 14 September. “Grass had started to grow through the flattened crops and the grains were growing in the ear,” he said.

“We had to spray it with pre-harvest roundup to kill the grass and the samples are terrible – Waggon feed barley was almost impossible to cut and yields were below 1t/acre.”

Of the crops that were still standing, Tartan malting barley achieved 7.5t/ha, but suffered from poor germination. “It was rejected and will now go for feed – we had a contract for £130/t.”

Harvest in southern Ireland went “like clockwork” once the weather settled, according to Billy Purcell who works for Brennan Brothers Agri Contractors, Leighlin Bridge, Co. Carlow. Winter wheat cutting started at the end of August in patchy conditions and at high moisture, he said, “But Einstein yields were good at 4.2t/acre.”

Early-cut winter barley yields were promising, achieving just under 10t/ha, but due to the bad weather that followed, yields dropped to 7.5t/ha, he added.

In Shropshire, bean yields were proving pleasing, but pea quality was mixed, according to Stuart Dolphin at Wrekin Grain. “Harvest is about done and dusted and we’ve had some nice bean samples that will make reasonable premiums,” he said.