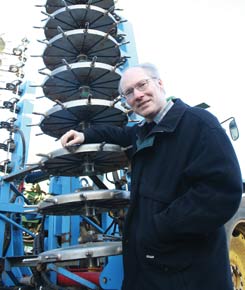 Imagine never having to hitch up the broadcaster or fill the sprayer to top-dress cereals or any other crop with nitrogen. Imagine, too, saving money by using an environmentally-friendly one-pass precision application technique that also uses less of the yield-boosting nutrient.

That, in essence, is what the Cultan method of crop nutrition promises and Yorkshire grower Andrew Manfield is a definite fan.

“We’re placing all our N into the root zone in one go, providing a long-term supply of nitrogen that doesn’t need topping up,” he explains. “Our limited experience so far is that we can get the same yields from 15% less N, which is attractive in terms of saving costs but also in reducing our carbon footprint.”

Mr Manfield, who farms at Hessleskew near York, was inspired to look into the technique by agronomist Christoph Bommes, who oversees use of the technique in his native Germany.

The technique involves injecting N in ammonium form using a novel spoke wheel injector developed by Dutch firm Duport. This creates “pools” of liquid N in the plant root zone of sufficient concentration to reduce the effect of nitrifying bacteria so that the fertiliser remains in the ammonium form longer.

“I went to Germany two years ago to find out more about Mr Bommes’ experience and was sufficiently convinced to bring back a demonstration injector for a couple of weeks,” says Mr Manfield.

“I then bought my own machine, have taken on the agency as Inject Direct and last year provided a contract service for local farmers to try the technique.”

With pretty consistent feedback that yields were being maintained using 15% less N in the form of urea ammonium nitrate with sulphur, most have come back with repeat bookings for larger areas this year.

“There is particular interest in using the technique for forage maize because of its reputation as an inefficient user of nitrogen but it can be applied to a number of crops,” says Mr Manfield. “Ideally, I’d like to use a pure ammonium fertiliser but supplies are pretty much only available with phosphate or sulphur included.”

As for the equipment involved, the Duport injector has performed faultlessly, he says, with no damage to any of the wheels so far. At present, the 8m unit is used on the front of a Matrot M44D self-propelled sprayer – which is equivalent to a 24m rig when only one rather than three passes are needed to complete the application programme – and it can be switched with the spray boom in about half an hour.

“At about 45kg, there is enough weight on each injector wheel to guarantee full penetration and being individually mounted they readily follow ground contours,” Mr Manfield points out. “The only change we’re looking at, apart from making a tractor-operated rig drawing fertiliser from 1000-litre IBCs to eliminate double-handling, is to add a roller to close the spoke hole and further reduce any potential for gaseous losses.”

“However, this does include a package of technical support, a spare injector wheel so that users can get working quickly again if one is damaged, and agronomic advice from Christoph Bommes,” points out Mr Manfield.

This year, contract injection will be charged at £30/ha.

“That should still leave growers with an overall saving in the cost of providing crops with N once their own costs or contract spreading charges for conventional application at a busy time of year are taken into account.”