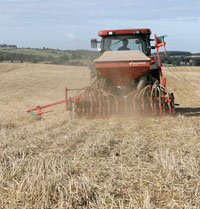 Most early-drilled wheat crops in the UK will fail to live up to their potential this season, leaving growers with below-par crops and lost profits.

The same is true of most years, with luck, rather than judgement, driving any success, say the organisers of a major new trials programme aiming to help growers take control.

“Early drilling is undoubtedly a high-risk strategy,” says Bill Angus, senior wheat breeder at Limagrain UK. “Nine out of 10 people think they can do it – but only one in 10 will succeed. Attention to detail is paramount.”

He defines early-drilled as crops sown right through the third week of September – not just those drilled at the start of the month. Correct choice of variety, seed treatment and fungicide is crucial.

To help highlight these and other key management issues, Limagrain, which owns plant breeder Nickerson, has joined forces with BASF to establish the largest commercial early drilling trials ever undertaken in the UK.

Pulling back sowing date is on the increase in a bid to shoehorn increasing autumn workloads into tight weather windows, especially this year with memories of two difficult autumns still fresh.

The pressing need to optimise returns from expensive labour and machinery resources is also driving the trend.

The trials, at BASF’s trials site at Hinchcliffe Farms, Rawcliffe Bridge in Yorkshire, have a number of objectives, says Mr Hartwell.

“Apart from using them to demonstrate seed treatments, foliar fungicides and varietal interactions, we will also be looking at the value of early-season fungicide inputs and more traditional treatments for controlling rusts and septoria.”

The trial features 16 varieties drilled in a 6.4ha field and split into 224 farm-sized plots, each 10x6m. Five seed treatments and eight fungicide programmes will also be tested.

The wheats were drilled at 180 seeds/sq m on 13 September, two weeks earlier than normal. Dry soils thwarted an earlier start, but the project should still provide a stern test.

Yellow rust is likely to be the key disease to watch, not only at the Rawcliffe Bridge site but nationally. Poorly protected early-drilled crops are at especially high risk, Mr Hartwell warns.

“Inoculum levels are high. There is a sense of complacency – but this is an accident that will happen.”

The trials are expected to become an established part of BASF’s activity at Rawcliffe Bridge. “The fact they are being conducted on a farm scale and managed by the host farmer means the results will be easily translated to field situations,” says Mr Hartwell.