The cereal harvest in Europe is now under way, with combining almost complete in several eastern states, where the weather has generally been hot and dry. But rain is delaying combining in central and western Europe, adding to crop concerns.

The French farm ministry is estimating a wheat crop of 34.7m tonnes, based on average yields of 7.1t/ha (4% above last year). But the wet weather could still reduce yields. The barley crop is estimated at 10.2m tonnes, 2% below last year, due to yield losses after poor April weather.

Germany’s harvest began three weeks ahead of normal, but recent rainfall has brought combining to a standstill. The barley harvest is advanced in the south and beginning in the north. Yields are variable, but are generally between 6 and 6.5t/ha.

Greece’s wheat harvest began 10 days earlier than usual due to dry weather and is all but complete this week. Crop quality is seen as above last year, with Hagbergs around 270s (last year, 240s). 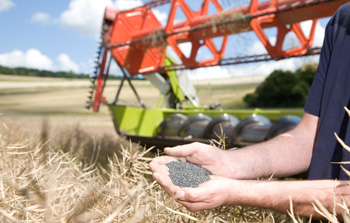 Only small areas of oilseed rape have been cut so far in the UK.

Hungary has harvested 3.3m tonnes of wheat so far, with 82% of the area cut, and the total crop is expected to be about 3.8m tonnes. Average yields are below expectations at 3.6t/ha. The winter barley harvest is complete, with a total crop of 0.69m tonnes, and an average yield of 3.67t/ha. The Polish harvest began two weeks early, but has been interrupted by rainy weather. About 40% of the winter barley has been cut.

Severe drought has led to significant losses in Romania, where the wheat harvest is 60-90% complete depending on region. Average yields are about 1.3t/ha, but crop quality is good. The drought is also lowering Bulgaria’s crop by about 1m tonnes to 2.5m tonnes.

In the UK, ADAS reports that much of the winter barley is ready for harvest and only needs a periodof dry weather for combining to progress. Small areas of winter barley and winter oilseed rape have been cut (less than 1% of each).

Combining is almost complete in several eastern Europe states, where the weather has been hot and dry, says Mike Mendelsohn (HGCA).