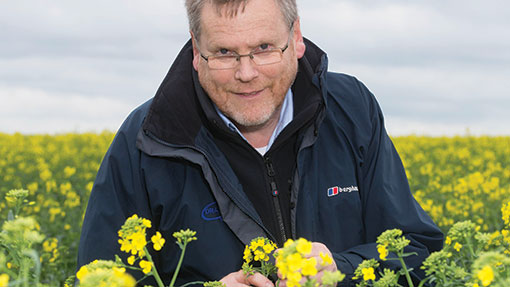 The key to growing oilseed rape this autumn, without the use of neonicotinoid seed treatments, will be to get the crop growing quickly by using the right variety, sown into good seed-beds and using starter fertiliser.

Crop experts say growers need to minimise the risk of early cabbage stem flea beetle damage by getting the crop out of the ground quickly and uniformly and past the two-to-four true leaf stage.

There is unlikely to be any insecticide seed treatments for use this autumn after a two-year ban on neonicotinoid seed treatments, such as Modesto and Cruiser, was announced earlier this year for oilseed rape crops.

Growers should consider varieties, such as Bayer’s own variety, Harper, which shows good early vigour rather than some other varieties which can be slower out of the ground, he suggests.

Drilling will also be important, and establishment methods in which seed is drilled to the same depth may be better than systems where seed is dropped behind a subsoiler leg.

“That doesn’t necessarily mean drilling earlier, just drilling it into good conditions when soils are warm to help it get away fast,” Mr Stacey says.

He adds that growers may have to raise seed rates a little. “But doubling seed rates is not the way to go. The quickest way to make oilseed rape yield poorly is to grow too thick a crop,” he adds.

Starter fertiliser should also become standard as it is important to do everything possible to get the seed out of the ground quickly.

The use of two pyrethroid sprays in the autumn has improved establishment in some Bayer trials, but resistance to pyrethroids is present in German flea beetle populations, so resistance could be seen here.

Bayer has developed an experimental seed treatment, based on methiocarb, which is already available in France.

“In trials it has given about 60-70% of the activity against cabbage stem flea beetle as the neonicotinoids did, so it will be useful but probably won’t be available until 2015 at the earlier,” Mr Stacey says.