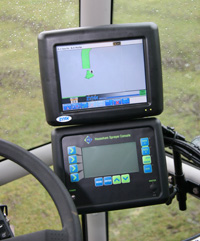 Adoption of precision-farming technology in potatoes lags behind cereals because there is uncertainty over returns for variable-rate application of inputs, a lack of confidence in advice and not enough independent research.

Measuring results, through yield-mapping, also presents significant challenges. But there is huge potential for autosteer precision guidance to develop efficiencies and savings for the industry.

This was the conclusion of afternoon technical discussions at the East Midlands Potato Day, led by industry consultant Fraser Milne. “Having identified a poor area of a field from cereal yield maps, growers should first assess whether they would actually get an economic return from planting potatoes in the poor area,” he suggested.

Returns from variable-rate application of phosphate and potash would tend to be limited in a potato crop – the cost would be better spread over cereals crops that form a higher proportion of the overall rotation. “But once problem areas are rectified, it is your potato crop that’s likely to deliver the biggest yield benefit.”

Accurately measuring yield using GPS was harder than for cereals, however, because varying amounts of soil were taken up the webbing and would skew figures.

Autosteer appeared to hold the biggest promise, with benefits including reduced overlapping of inputs and perfect beds, leading to less tuber damage and more uniform crops.

“I can’t understand why more growers in the UK aren’t using it,” said Tasmanian grower John McKenna. He claimed he made an extra £12,000 a year by being able to plant 4% more rows. “You do a perfect job and can work all night,” he added. About half the Tasmanian potato area was operated using kit with RTK (Real-Time Kinematic) guidance, where a base station helps fix position. The capital cost was £20,000-25,000, he said.