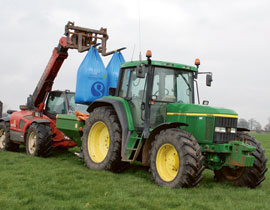 Nitrogen prices continue to increase with ammonium nitrate rising above £340/t as global demand continues to outstrip supply. Philip Case looks at how growers can use fertiliser more efficiently.

In the face of rising nitrogen costs, growers are being urged to adopt efficient techniques in fertiliser use if they want to benefit from continued high crop prices.

Mark Tucker, head of agronomy at Yara, said a resilient fertiliser programme should consider nutrient type, timing, rate and accuracy of application and an understanding of what nutrients are required.

For timing, growers should be looking to apply nitrogen as early as possible and higher rates will help ensure uptake, he said.

“This year has again confirmed the value of early spring top dressings, especially where higher rates were applied,” he explained. “Rather than the typical 40kgN/ha for first application, growers should consider 60-80kgN/ha.”

Using the right fertiliser product, at the correct rate, for individual crops was essential, he noted. “Choosing a high quality fertiliser such as a uniform rather than a blended fertiliser has been proven to regularly achieve higher returns.”

Mr Tucker said growers should consider whether an ammonium nitrate or a urea-based nitrogen fertiliser was more suitable.

“Over the years, all our work points to ammonium nitrate being the most appropriate form of nitrogen for UK farming, in terms of reliability and robustness,” he said.

Savings could be made from switching to a urea rather than ammonium nitrate-based nitrogen fertiliser, but more nitrogen may be lost to the air as it volatilises, he warned.

“Urea may appear to be a cheaper option to go for, but it has an average of 25% emissions, so 25% of the nitrogen you apply within three days of application will be lost.”

“Factoring in the effect of a 5% yield loss relative to the value of your fertiliser will be important,” he said.

He pointed out that low soil moisture could limit nutrient uptake via the root system causing deficiencies in essential micro or macro nutrients that could cost 10-20% in yield.

“Many symptoms of poor growth in crops this season have been due to nutrient deficiencies as dry soils take their toll,” he said. “Notable areas of concern this year have been potash, sulphur, copper and zinc deficiencies in wheat crops and potash, magnesium and boron in oilseed rape.”

He believed that the continued dry weather will result in higher levels of residual nitrogen in soils going into next season for most, but a wet autumn could counter that.

To calculate optimum nitrogen rates for arable crops, he recommended using a computer data program, such as Yara’s N Plan.

“This is because calculations are based on weather data for the last 12 months, rather than historical data, which may be more accurate.”

Finally, he said growers should understand their nitrogen/grain price ratio to try to get an indication about their optimum nitrogen rate (N Opt).

“Twelve months ago, growers were operating at a breakeven ratio of 7:1 (N:Grain), this year it is 5:1 so a new N Opt review should be undertaken each year.”

GrowHow agronomist Allison Grundy said using the correct nitrogen source, sulphur products, and applying at the correct rate and timing could improve profitability in wheat by more than £250/ha at current costings.

“Using GrowHow’s N-Min and N-Calc system is one of the best methods to measure and predict soil mineral nitrogen, which could help you achieve on average an additional £60/ha of value to the crop,” she said.

“Compared with urea, GrowHow’s Nitram (34.5% ammonium nitrate) fertiliser offers a £53/ha benefit and if you add sulphur product DoubleTop there could be an additional £141/ha gain.”

Accurate application and calibration of your spreader – for spread width as well as flow rate – will also increase spreading accuracy, she noted.