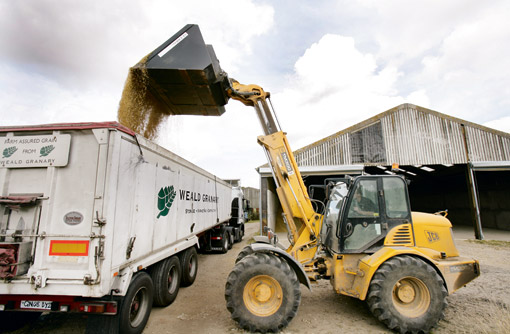 The NFU is calling for the grain trade to adopt an electronic information exchange, encompassing passports and sample results. But what would this mean for farmers and end users?

It is easy to argue that the current procedure for grain deliveries is outdated, cumbersome and slow.

Farmers have to manually fill in paper passports, rarely get to see the sample results of grain once delivered, and are often only told about quality price reductions days or even weeks later.

In a bid to drag the industry into the new Millennium, the NFU, HGCA and a number of central grain stores are trying to introduce an electronic system, whereby farmers receive this vital information within minutes of delivery, rather than weeks.

It is hoped that this will improve farmers’ marketing and remove millions of pounds of cost from the supply chain.

“At the moment, farmers have to fill in passports by hand, and give them to the lorry driver to pass on at the point of intake,” says Guy Gagen, chief crops adviser at the NFU.

“There is so much information to put onto these forms that it is easy to make errors, which cause delays at the intake. I’ve even heard of cases when lorries have been turned away because the passport has the wrong date or issue number on it.”

Upon intake, whether at a port, processor or store, the grain is weighed, sampled and tested for moisture and quality parameters.

Currently, if the grain meets or exceeds the required specification, the farmer hears nothing more; if there is a claim for high moisture or similar, he may not hear for days or weeks – and if the load is rejected the merchant must find a new home for the grain, and buy in an alternative in its place.

By moving to an automated system, farmers would be able to pre-fill the passport online, reducing the chance of mistakes and associated delays.

They would also be able to view sample results via email or text as soon as they are entered into the system at the point of intake, says Mr Gagen. “If, for example, you are sending a few loads away, and find they are getting higher and higher in moisture, you can act before getting a claim or rejection.

“Merchants don’t like the hassle of dealing with claims and rejections – if you can reduce those problems, hauliers will have less wasted time, and that keeps costs down, making our grain more competitive versus imports.”

Where grain is showing particularly high quality levels, farmers could opt to market it to a higher value home, better targeting grain quality to the end use.

The NFU and HGCA are carrying out a feasibility study to see how the system could be implemented across the industry, and hope to have a trial, based on BPEX’s pig passport system, in place for the crop of 2012.

Of course, there will be issues, including security and the need to retain a paper-based system for farmers without web access, but these should not prove insurmountable. “Databases aren’t free, but the current system costs us millions anyway, and the information is being wasted. I think it’s potentially very exciting.”

Andy Barr, a director at Weald Granary in Kent, has trialled a similar system over the past couple of years, with great results.

The GeneSYS Enterprise Software was developed in conjunction with Precia-Molen and Openfield, as well as Hampshire Grain, Wiltshire Grain and Aberdeen Grain stores.

“I found it incredibly useful – you know exactly what you’re harvesting, and what you’re going to have in store. If one field of milling wheat or malting barley was below standard, I could move onto a better field and get that in before the rain.

“I’ve also got an accurate record of every load I’ve sent in, which I can use alongside agronomy records, which is incredibly useful. I could even see the impact of harvesting oilseed rape at different stages of ripeness on the oil content.”

In addition, central stores can test outgoing grain, providing better quality assurance to end users. “It would be great to roll this out to ports and other homes – we could have a blueprint that can benefit the rest of the industry.”