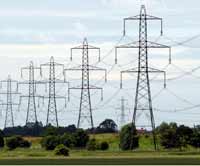 Scottish and Southern Energy has completed a £13.5m deal to build Scotland’s largest biogas plant at a former landfill site in north Ayrshire.

SSE is the first energy company in the UK to commit to construction and operation of an anaerobic digestion biogas plant of this type and expects it to be operational by 2011.

The plant will process around 75,000 tonnes of waste annually, producing 2.5MW of electricity. Recycling company, William Tracey Group, has signed a 25-year contract to supply feedstock materials, which include 37,000t of waste foods, plus manures and organic effluent sludges.