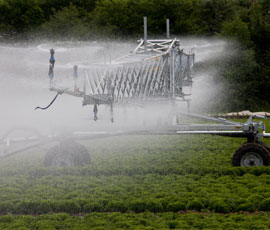 Farmers in East Anglia are likely to face severe water restrictions for irrigating crops this summer, according to the Environment Agency.

The latest drought report from the agency said prospects for water availability for spray irrigation in the region were poor this summer.

This winter is the driest on record within the Anglian region as a whole, covering the five-month period up to January. As a result, water levels are well below average in many rivers and aquifers.

Groundwater levels are “exceptionally low” in the region, which is an indicator for severe groundwater drought. Levels across many southern and eastern regions are “notably low”.

If the dry weather continues, the agency said groundwater was likely to show little or no recovery – and levels will be either notably low or exceptionally low during the irrigation period, unless there is significantly higher rainfall.

The report said: “Without above average rainfall for the remaining winter and early spring period, significant restrictions on abstraction for spray irrigation from surface water are probable and we may have to restrict abstraction from groundwater.

“However, abstraction from reservoirs will not be affected.”

In addition, there is still an “exceptionally high soil moisture deficit across East Anglia from the continuing dry weather”.

December saw average rainfall, but because of the high soil-moisture deficits there was generally little response in either the rivers or groundwater.

With the exception of Suffolk and Essex, which had average totals, January’s rainfall was below average throughout East Anglia at around 75%.

However, the agency said there has been slightly more response to January’s rainfall particularly in the Essex area.

Andrew Alston, CEO of the Broadlands Agricultural Water Abstraction Group (BAWAG), said the situation was “very worrying” and he urged farmers to review their commitments in respect of their irrigation licences.

“As farmers, we rely on a clean and reliable source of water. But what affect is this going to have on our ability to supply factories?” he asked.

“The factories use potatoes, carrots, onions, parsnips and salad crops – but how are these factories going to survive if we cannot produce the crops?

“We will become unreliable producers if we’re not careful and someone else will supply our markets.”

“There’s nothing that the Environment Agency can do, but we have got to lobby our MPs and change the way the legislation is implemented.”

Dry weather is set to generally continue into the middle of February with the longer term prediction for the next three months to have a higher probability of experiencing below average rainfall, said the report.