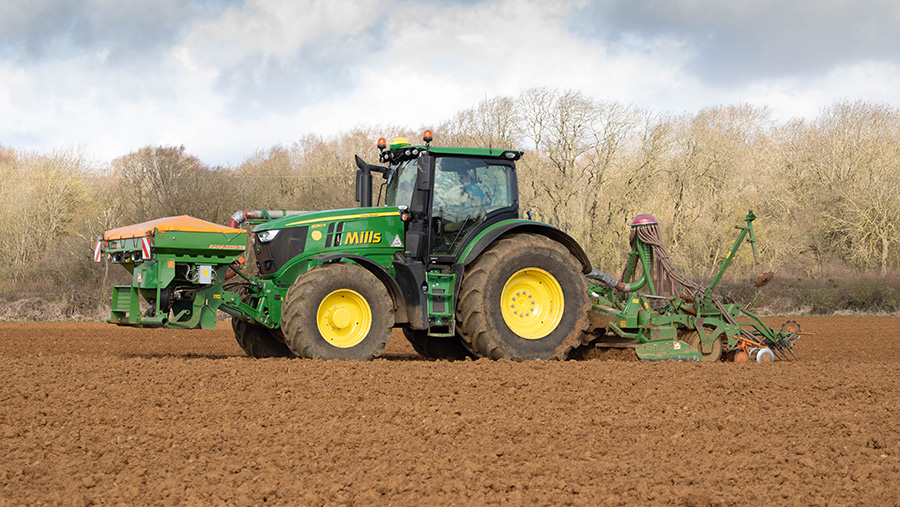 This week has been the first dry spell for months, and some growers on free-draining land are out cultivating while others are drilling barley, sugar beet and beans.

For some drills, it’s the first action since last September, and conditions are a little mixed with some soft spots. But with a huge backlog of work, farmer are cracking on.

Some potato farmers are in action too, with both planting and lifting happening. Here are a few highlights from across the UK.

Tom Hawthorne’s Kverneland drill was out yesterday in what he called “Tine drill Tuesday” in Nottinghamshire.

In Oxfordshire, Samuel Clarke is cultivating ground in preparation for drilling spring barley.

Further north in Leicestershire, Nick Wilson is drilling spring barley into a failed crop of oilseed rape with a Mzuri.

Spring barley into failed rape. Not going too badly… pic.twitter.com/0Iu3ATyZBN

And in Norfolk, Tim Barrell is creating a bit of dust with his Horsch drilling in surprisingly dry conditions.

In mid-Norfolk, sugar beet drilling has kicked off for Mark Frary going into freshly prepared seed-beds.

So today we have the first lot of #Sugarbeet going into a freshly prepared seed bed yesterday. Seed placement into moisture so it’s up to Mother Nature now ?. @waddledogie @clubhectare2211 pic.twitter.com/XuhDRbMp6G

#beet20 is go ?? while #beet19 is still harvesting @BritishSugar ?? pic.twitter.com/GzGrqmY9sI

For Lincolnshire farmer Peter Cartwright, it is the first time his low-disturbance Horsch Sprinter drill has been out since September. Here he is drilling beans at Revesby Farms.

Tom Sewell is also drilling beans in Kent, picking the drier spots and going across the slope.

And we’re off! New pilot on the drill! #clubhectare pic.twitter.com/t9Regbr4jZ

Stick or twist with winter barley

It’s not just drilling, farmers and agronomists are out crop walking. In his video, Merseyside grower Olly Harrison is considering whether to stick with this crop of winter barley or do a bit of a repair job and stitch in some spring barley.

Winter barley stick with it right it off or stitch spring into it ? ?‍♂️ pic.twitter.com/8xMv400SKb

In East Suffolk, Capel St Andrew Farms is planting potatoes, which will be ready for lifting in June.

Today we are continuing to #plant #potatoes to #harvest in June. No buying #limits when these bad boys are ready! #buyBritish #SupportYourFarmers #KeepOnFarming #coronavirus #StaySafe pic.twitter.com/dIOmyxzTtA

Meanwhile, in south Lincolnshire the potato harvest continues at Worth Farms having been severely hampered by the winter deluge. Simon Day shares a video of the farm’s two-row Grimme self-propelled harvester.