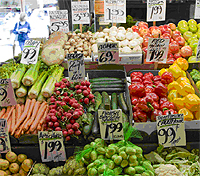 Tackling global food security while avoiding further damage to the environment will be the focus of an important debate to be held at next month’s Conservative Party conference in Manchester.

Organised by the Crop Protection Association, in association with Farmers Weekly, a panel of top speakers will discuss the impact of rapid population growth on food, energy and water supplies over the next 20 years.

“A lot has been written recently about the relative benefits of different forms of agricultural production, but one key fact often gets missed,” says CPA chief executive Dominic Dyer, who will chair the debate. “If farmers’ yields were still as low as those of the 1950s, we would need nearly three times as much cultivated land to feed today’s population.

“Many people are unaware or uninterested by how the food we eat is grown. But the truth is that if we enjoy a steady, year-round supply of fresh produce at affordable prices, it’s thanks to modern agriculture and well-trained professional farmers.

“Modern agricultural achievements are the result of technological advances, new management techniques and new chemical treatments that have made it possible to feed 6.7bn mouths.

“But soon, even this will not be enough. Not only is global demand dramatically exceeding the growth in supply, but also we have limited time in which to increase the amount of fruit, vegetables and grains produced if we want to prevent a worldwide food crisis.

“Boosting productivity to meet this demand is easier said than done because the world faces other huge challenges, including climate change, population growth and resulting resource shortages,” says Mr Dyer.

“Research presented at a recent meeting hosted by the UN Food and Agriculture Organization (FAO) concluded that agricultural production would need to increase by 70% by 2050 to cope with a 40% increase in world population, and to raise average food consumption to 3130 calories per person per day.

“As the world’s largest agricultural producer, the onus is on the EU to make a substantial contribution and EU agricultural policies should help foster this much needed innovation. Our food supply depends on it.

“The trick is to balance high yields with human and environmental safety and protection of biodiversity. And, despite perceptions to the contrary in some quarters, modern agriculture is very good at striking this balance.

“For example, decades of well-funded research has failed to find a ‘smoking gun’ of a major public health impact from pesticides.

“It seems obvious that innovative agricultural practices are required to increase the amount of food we produce. Today’s regulatory vision needs to be connected to the reality of food production, and science needs to be put back at the heart of policymaking.”

Each will have a chance to put their views before an audience of party members, politicians, journalists, lobbyists, agriculture and food industry stakeholders.

The event will take place as a breakfast debate from 7.30-9.30am on Thursday 8 October in the main Exhibition Hall (Exchange Room 1) in Manchester Central.