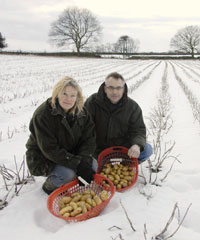 A Yorkshire potato grower has publically spoken out about his own dealings with a Tesco packer claiming he has lost £15,000 in income.

Mark Exelby of Hutts Farm, Grewelthorpe, Ripon, has left his 10 acre crop of salad potatoes in the ground after his packer told him three-quarters of the crop would fail to meet specification.

Mr Exelby said he would prefer to take his crop of organic salad potatoes to a Tesco car park and give them away to customers rather than face so much of his produce being discarded.

He believed the credit crunch and colder weather had caused a slump in demand for Tesco organic salad potatoes and claimed this was the real reason for the packer’s decision.

Packer, Greenvale rejected the potatoes even though Mr Exelby’s Greenvale agronomist had told him earlier in the growing season that the crop quality was excellent.

“I went to Greenvale and I was shown if there was one misshapen, green or blemished potato in a 750g bag, the whole load containing 30 bags would be rejected.

A spokesman for Greenvale denied Tesco had any involvement in Mr Exelby’s potatoes being rejected. He said Mr Exelby’s crop did not meet the packer’s specifications.

“Despite this, we attempted to trial pack the crop with the grower present. Unfortunately it was obvious to both parties due to the very high levels of harvester damage that this was not possible.

“While we understand the growers frustration it is indisputable that poor quality fresh potatoes are not purchased by customers and result in potatoes having to be thrown away unsold.

“The loss of this crop to our retail market actually resulted in Greenvale having to replace it with expensive imported Nicola at a much higher price.”

Another grower said his packer told him he needed to cut £100/t off his contracted price, or face his produce being rejected.