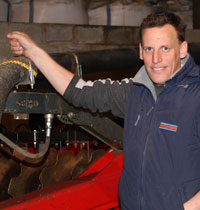 Leicestershire farmer and contractor Steve Heard (pictured) has recorded mixed yield results for the 2009 harvest with his novel exhaust-to-fertiliser system.

He is philosophical: “There’s good news and not-so-good news,” he says. “Overall, the results are not quite what I was hoping for but they are taken from only one season. It could be that next year they will be better.”

Last autumn, Mr Heard became the first person in Europe to trial a system that, according to its Canadian promoter N/C Quest, could reduce crop dependency on nitrogen without affecting yield.

The system calls for tractor exhaust gas to be mixed into the soil as it is cultivated. One of Steve’s 500hp John Deere 9630s was adapted so that exhaust gas could be piped into the ground using the tines of a 5m Sumo cultivator.

Using this system 1400ha (3500 acres) were cultivated and drilled with winter wheat. Comparisons were made between treated and untreated areas – some of these received no nitrogen fertiliser, others had only a third of their normal fertiliser and some two- thirds or their full amount.

“The most noticeable and promising results came in the fields which received no fertiliser,” he says. “The untreated areas yielded 3.2t/ha while the land which had received the exhaust gas treatment notched up an extra 22% – a yield of 4.1t/ha.” 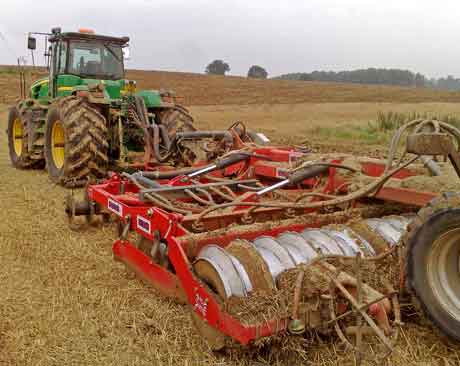 Full steam ahead for the 500hp John Deere 9030 with its Sumo cultivator in tow. Exhaust gas is cooled to 65C before it is injected into the ground.

Mr Heard believes that, if this trial can be replicated, this result could have an important bearing on the way organic crops are grown.

The news was somewhat less startling for the other trial areas, though. Land receiving the third-rate fertiliser yielded 8.1t/ha for the untreated area and a slightly higher 8.5t/ha for the treated.

“I was rather hoping for a more convincing result,” says Mr Heard. “But I have always kept an open mind about this project. There is an element of mystique which has yet to be proven beyond doubt, despite the success N/C Quest would claim to have had with the system in Canada and other parts of the world.

“I am prepared to give it another go for next year and have adapted our second John Deere 9030 so that it can also inject cooled exhaust gas into the soil,” he explains. “This autumn we will replicate the trials over 2000ha (5000 acres) with selected fields receiving the exhaust injection treatment and the different rates of fertiliser.”