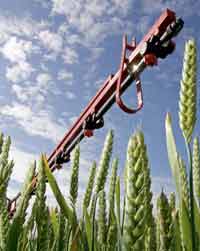 Science-based decision-making is essential to ensure global food security, delegates to the AgChem Forum in Barcelona were told on Wednesday (23 September).

Hosted by the Crop Protection Association, the debate took place on the eve of the adoption in Brussels of controversial new rules on pesticide approvals.

This will move the approval of pesticides away from the current system, based on risk, to one in which they can be banned according to how hazardous their ingredients are. The issue was the subject of last year’s Farmers Weekly Save Our Sprays campaign.

The vote is due to be taken by the European Competitiveness Council on Thursday (24 September) but is expected to be just a rubber stamping of the agreement reached with the European parliament in January.

The UK is expected to abstain from the vote on the grounds that no proper impact assessment has been done into the full effects of the removal of key crop protection products that will happen under the new rules.

And they warned that EU farmers’ ability to respond to these challenges would be seriously constrained without access to the most advanced developments in agricultural technology, including pesticides.

Ian Denholm of Rothamstead Research warned of the increase in pest resistance in key crops across Europe, a situation which would be made far worse by the loss of vital crop protection products under the hazard-based cut-off criteria in the new EU Pesticide Authorisation Regulation.

And Euro-MP Robert Sturdy said all the EU institutions, including the commission and the parliament, had failed in their responsibility to carry out a proper, science-based assessment of the real impact of the cut-off measures on agriculture and food production in Europe

“As an industry, we need to position ourselves as environmental stewards and move forward with a vision of how we develop technologies to enable more efficient use of land, water and energy for agriculture in Europe, which is critical to tackling the food security and climate change threat.”

The CPA is organising a special debate at next week’s Conservative Party Conference in Manchester on the food security challenge. A panel of top speakers, including shadow farming minister Jim Paice and The Observer science editor Robin McKie, will consider how best to meet the challenge of growing food demand while respecting the earth’s environment and climate. For more details contact the CPA on 01733 355 374.