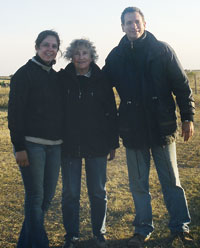 A combination of good weather, an improving crop this year – despite the struggling start due to the dry weather – and strong international crop prices were reflected in great enthusiasm for the four-day show this month.

Highlights included axial-flow combine harvesters, which in the past six years have grown to nearly 70% of the market, technical innovations for precision farming, such as performance monitors, and new seed dressings to combat pests and diseases to increase the productivity of soya beans, corn and sunflower crops. The increasing use of GM crops in the world was also featured, which in 2010 reached 148m hectares globally, including 67m in the USA, 25m in Brazil and 23m in Argentina.

New high-yielding transgenic soybeans that offer tolerance to lepidoptero (worms) throughout the crop cycle by the bacterial toxin Bacillus thuringiensis (Bt), which is toxic to many insects, were also announced, although their arrival here may be delayed by the legal framework of intellectual property. The seed industry is seeking agreements with farming institutions, who recognise the value of the new varieties, to facilitate these new soya bean technologies. But the problem with releasing these new varieties is that farm-saved seed cannot easily be relegated.

Over the next month, I will start harvesting my soya bean crop on the 500ha of land that I rent in Bigand, at the heart of the Pampas region. Good international prices – currently US$332/t (£205/t) in Argentina – and high yield expectations of around 3.4t/ha, looks promising. Despite the high export retention taxes of soya beans (35%) and some non-farmer friendly actions of our present government, this should mean I can still generate a margin of US$500/ha (£310/ha). I’ll also shortly be buying my next cycle of crop inputs of urea and monoammonium phosphate for 2011-12 as fertiliser prices are rising.