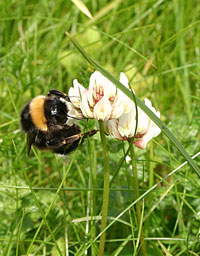 DEFRA has increased funding for research into bee health by £4.3m.

Since last summer one in three bee colonies has been lost and the extra money will help fund an investigation into why this has happened.

DEFRA secretary Hilary Benn said that nearly £2.3m over the next two years would support the work of the National Bee Unit while a further £2m over five years would go directly towards bee health research.

The money was welcomed by NFU vice president Paul Temple but he said more funding was needed.

“The industry has been lobbying for many months for the government to increase the level of funding for research into the problems affecting bee colonies.

“This funding is a step in the right direction and recognition of the seriousness of the problems but it isn’t as much as we were hoping for,” Mr Temple said.

“Honey bees are an underpinning component of the British countryside – whether it’s heather moorland, a hedgerow, an orchard or a field of beans. The role they play in pollination is vital for food production,” he added.