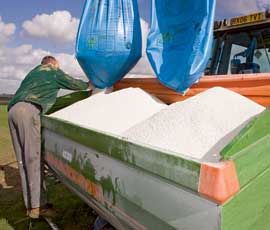 A farm has been fined £8000 after a worker’s toe was severed when his foot became trapped in a fertiliser spreading machine.

Andrew Walis was maimed at Burton Farm, Laurencekirk, Aberdeenshire, when he was spreading lime on a field in May 2010 with farm partner Rhys Anderson.

After noticing fertiliser was jamming in the spreader, Mr Walis was asked to stand inside the spreader’s hopper and use a broom handle to keep fertiliser flowing.

But as the spreader drove over uneven ground, Mr Walis slipped and his foot got trapped. He had to use his penknife to cut his boot and sock off and free his foot.

Mr Walis’ foot was so badly damaged a toe had to be amputated while two others were seriously injured.

He spent a week in hospital and was off work for three months.

At a hearing at Stonehaven Sheriff Court on Wednesday (16 March), Burton Farms pleaded guilty to not ensuring the safety of an employee.

The family partnership which operates the farm was fined £8000.

“He should never have been asked to put his safety at risk by standing inside the machine so close to the moving parts without any protection,” he added.

“If his employers had used their common sense it would have been clear that they were asking Mr Walis to do something very unsafe and he was likely to be injured.”