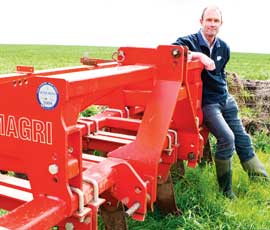 I have just attended the AHDB Crop Research Conference and an opening slide showed that worldwide pre-harvest crop losses were anywhere between 14 and 50%, thus highlighted why we were there.

It was primarily aimed at scientists and no matter how much coffee I drank, I still didn’t seem to grasp the full implications of the IBI1 mutation encoding of aspartyl-tRNA synthetase. However, there were some useful practical insights too, regarding development of pesticide resistance for a start. If you begin to think of this in terms of evolution by natural selection, it seems obvious that any pest, weed or disease if attacked by only one mode of action, particularly at low rates, will develop a largely resistant population in a very short time.

We are doing a little by increasingly stacking several different herbicides and fungicides, but the regulators also need to bear this in mind. We need to keep as many actives as possible together with decent rates as this will ultimately keep pest populations, and therefore the overall chemical use, lower. If we absoulutely have to, I would rather see a product’s use restricted to once every X years rather than have to reduce rates or introduce huge buffer strips.

A fascinating non-chemical example of natural selection in action was given: a machine exists in Australia that collects weed seeds from the back of the combine and mills them prior to spreading. However, currently no plan is too cunning for evolution and a ryegrass population has developed that grows in a very low, prostrate manner, thus avoiding the cutter bar.

So if we are unlikely to win a fight with evolution, perhaps we need to try mimicking what it has produced by increasing the diversity of crops, varieties and buffer strips we grow. This would include mixing varieties and companion cropping and I’m trying these tactics again this year. However, increasing diversity as well as increasing food production and profit is the tricky bit so it was encouraging to see work on designing predator-encouraging/pest-suppressive landscapes. Surprisingly this could mean bigger fields and, less surprisingly, bigger buffers.