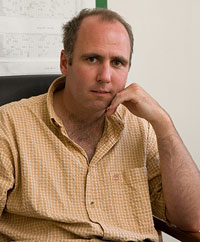 What an exciting time we’ve had just recently. We managed to get the new potato packing line running before Christmas with Haith technicians’ help.

Apart from a few teething problems it has run very well and I’m sure it will do everything we expected and more.

It allows us to move potatoes from store to lorry without having to expose them to the outside, particularly useful with temperatures down to -14C.

We still have niggling problems with store ventilation and cooling which I trust will be resolved.

We completed our 2008 harvest on the 2 January, although there are still a few hundred tonnes to be dried. I hope the temperature will rise a bit and allow us to finish using less gas.

The economic climate has changed dramatically. Even established relationships with long-term partners are under strain, with everyone chasing money.

Liquidity is a real issue and the government holds a lot of the keys for agriculture.

The EU part of area aid was paid between Christmas and New Year, but the national top up, machinery subsidy and equivalent of stewardship have not been forthcoming.

The dairy company terminated our rolling contract at the same time and then wanted to negotiate a new one with a lower price and extended payments.

Mark Halliwell and his colleagues have had a particularly bad time in the Ukraine, with limited or no gas supplies, snow, temperatures down to -18C, and electricity supplied only intermittently.

The Ministry of Agriculture visited to inspect machines we bought in a subsidy scheme last year, so there’s hope we might see some money eventually.

Intervention for grain maize is again being spoken about. It would help lift the price from the current €78/t, which by the time you read this could be the equivalent to £78/t.