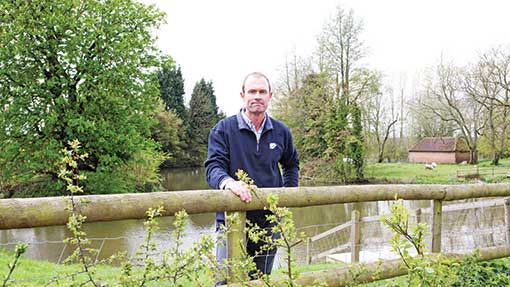 Generally wheat crops look full of potential, but with relatively high septoria levels low down, which is a bit of a déjà vu from 2012. Let’s hope the sun appears rather more this year.

As usual for us we have sprayed OSR twice for sclerotinia, despite temperatures remaining a tad on the low side. There was the odd weevil knocking about, but we resisted the temptation to target them and I look forward to learning more about which species to grow in my margins to help with pest control on the HGCA stand at Cereals.

At present, oilseed rape grown with a companion crop looks exactly like that grown without – the direct-drilled spring barley looks exactly like the cultivated lot and the wheat and OSR varietal mixtures are equally unremarkable. However, the oat field direct drilled with a tine coulter on one side and a disc on the other is looking better after the tine method. This may not sound earth-shattering, but in the direct-drilling world it is highly controversial! As with other aspects of farming, I am learning most about the whole conservation agriculture thing by experimenting and getting together with other similarly deranged farmers in the field.

Last year my ELS scheme came to an end and I entered into another agreement. I was very pleased to pep up my largely grass-based options with wild bird food, flower and nectar mixes, annually cultivated areas and overwinter cover crops. Unfortunately, the latest proposals regarding which scheme options would constitute double funding under the greening element of the SFP include all of the above, so my ELS payment could drop by about 80%. This would make it unviable on its own, as I’ll have enough hedges, grass margins and legume crops to qualify for the greening payment and we currently have no new environmental schemes we know we can get into. I shall do my best to keep my habitats by way of consumer-led premiums for my crops, but nationwide there are about 4,000 of these post-2012 ELS schemes potentially affected, so something needs to be done ASAP to avoid an outcome nobody wants.