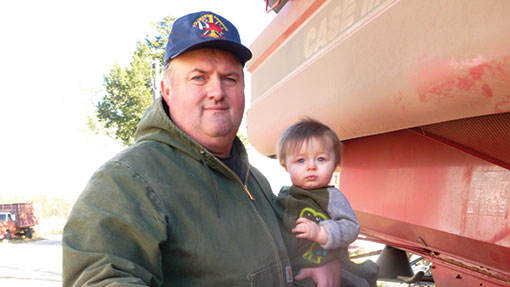 Since I last wrote the drought situation in my immediate area has gotten worse, going from moderate drought to severe drought, until the very northern few miles of my county (where I farm) was moved into the extreme drought category last week on the US drought monitor.

A little over half the state was in that category, with the entire state suffering from moisture deficit. The United States Department of Agriculture (USDA) now says the Kansas wheat crop will be the smallest since 1996.

On 10/11 May beneficial rains fell within a few miles of my farm, ranging from an inch up to four inches (25-100mm). I received a tenth of an inch (2.5mm) and to say the least, I am very disappointed.

When I planted my corn on 2/3 May, I was concerned there was not enough moisture to bring it up, but it all has emerged and looks pretty good. Some hail came with the rains this weekend and one of my best friends lost about half his stand to hail.

Our county also had a very brief tornado the evening of 10 May that did some damage at one farmstead.

With rain chances of 80% and amounts forecast to be 2in (50mm) plus, I had been confident I would start planting beans as soon as it “dried up”.

Since it never got wet to begin with, I am trying to figure out if I have enough moisture to bring soya beans up, or if they will sprout and die. Our window to plant beans with no yield drag is 10-15 June, so I do have some time and I would prefer to get them in the ground and growing.

My soya beans will all be no-tilled, I have put down Sencor (metribuzin) with the burn down, so the fields are clean. Because of so many glyphosate-resistant weeds, residual herbicide is again the norm.

I’m afraid I’ll be crying for rain all summer, we’re sure off to a dry start.

Brian Hind farms 1,250ha of prairie land, of which 770ha is family owned plus the rest is rented. Of this, 330ha is arable cropping with maize, soya, grain sorghum, alfalfa plus a mix of rye, triticale and turnips for grazing by 200 beef cattle. Grassland is used to produce hay

Watch this video of a tornado which struck Kansas, in the same area as Brian Hind: