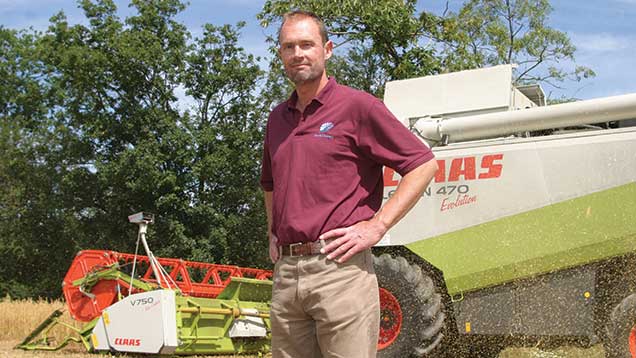 We finished harvesting our wheat on 8 August, which is as early as I have ever known. Usually we would have done the spring barley first but it’s not even ready yet so plenty of time for planting cover crops and oilseed rape, in theory.

This year there will be a lot more cover crops than oilseed rape which is quite a turnaround from a few years ago.

The much reduced oilseed rape area will be made up of home-saved Amalie, which performed better than Extrovert or Picto here this year in the absence of any insecticides, and a Clearfield variety to cope with a patch of charlock and reduce up-front spray costs.

Due to low prices, we have made do without an extra worker at harvest this year and our shepherd has carted grain for a few days at the peak times. I knew the sheep would have their use one day.

In fact I am quite a fan of them grazing our cover crops and adding their extra gut biology to the system.

We are now, once again, rotating an area of grass – some for seed – around the arable land and growing stubble turnips prior to spring barley, to be sown at five bushels/acre, of course.

Is it time to “do an Opec” and all agree to produce less to increase prices?

We protested about milk prices about the year 2000 by blockading supermarket depots.

Typically, someone would come out about 3am on a freezing morning and offer us talks and we’d all go home.

History shows how effective that was and we got out of dairy.

We could copy the French and block the motorways, but we have had enough of that in Kent, and during Operation Stack we struggle to get grain lorries here.

Thankfully, when I’m sitting on top of the North Downs on a sunny harvest day looking over the Greensand Ridge, the Weald and Romney Marsh, all thoughts of prices are overcome by the sheer beauty of the countryside and the pleasure of actually being there as a job.