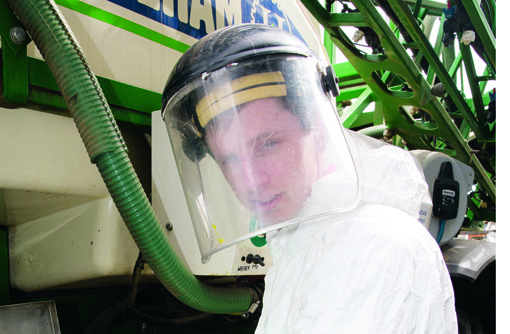 T1 fungicide applications have been completed, on time and under good conditions. In most cases they have turned out to be one of those complicated tank mixes, where the water fills quicker than you can get the chemical in and cans well rinsed.

The first sclerotinia spray has also been completed on the oilseed rape, most areas being at the first petal fall stage. The second treatment will probably coincide with petal fall for the backwards patches, if we’re lucky.

Rowcrop wheels have finally replaced the intermediates on the sprayer, and reducing the working engine speed 250rpm when using them has resulted in an estimated drop in fuel usage from 10.2 litres/hour when on LGP tyres to around 8 litres/hour on the rowcrops. It’s not exact, but as the rest of the season goes on I’ll be able to build up a more accurate figure. Then I’ll add work rates and using the bowser into the equation and really confuse myself.

I’ve had some little stickers made up for the outside of the sprayer to clearly display the contact details of local bee keepers, which will act as a reminder and keep details at hand should they need to be notified. Interestingly, however, when I contacted the local beekeeping association to make sure the numbers I had are up-to-date, they informed me they no longer had a spray-warning service – due to so few issues in the past few years. Hopefully, this is due to the good practice employed by the industry, such as product choice and sensible application.

However, with the recent neonicotinoid seed treatment ban, it’s more important than ever to keep up the good work and make sure everything possible is done to limit any possible effect on bees from the alternative products and strategies we have to use to deal with pests previously controlled by these seed treatments.

It’s only a little “reminder and information” sticker, but a few people have shown some interest. Unfortunately I’m not a multinational company with a big budget, so it would be great if a chemical company or someone would help out by printing some more to give out to other operators.