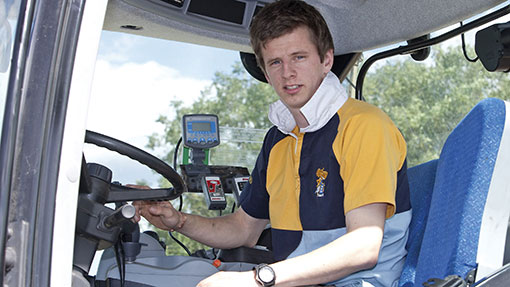 We’ve reached that time of year again – don’t ask where the time has gone, as I’m still wondering that myself.

The majority of the work involved with growing the crops is complete, but there’s still an ever-growing list of things to be done before the combine starts rolling and we start it all again.

You could be forgiven for thinking the apocalypse is coming, albeit in a slimy and grassy way.

This year slugs are close to out-populating blackgrass plants in most places – which given the pressure on metaldehyde, isn’t an ideal situation heading into the autumn. Slug traps will be out in force as soon as the combine leaves the field to get an idea of the numbers.

Management of ex-OSR fields will need extra focus to make sure volunteers aren’t feeding an army ahead of drilling wheat.

This year we’ve been very lucky with blackgrass – a combination of cultivation methods, stale seedbeds, late drilling, stacking pre-ems and good conditions for them to work has resulted in odd plants but nothing overly serious.

However, driving around it’s obvious a lot haven’t been so lucky, but few appear to have taken the hard-line approach and sprayed areas off.

Cereals was a completely different experience for me this year after I was persuaded to enter the Farm Sprayer of the Year competition. I remember reading about previous winners in Farmers Weekly or NROSO magazine when I first started spraying four years ago and thinking it would be great to know half as much as they do, and to get that far in the competition. So having actually won it is a very strange, but brilliant feeling and I’m very proud to have done so.

Thanks must go to Tom Robinson and the team at Syngenta for the time and effort they put into running the competition and I urge any sprayer operators thinking about it to enter next year, you’ll learn a lot and meet some great people while you’re doing it.