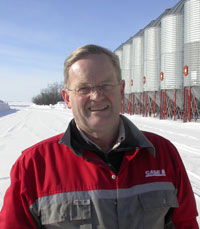 After five years of enjoyment writing these articles, it’s time to allow someone else the opportunity.

I should like to thank Farmers Weekly for allowing me to be a contributor. It has been a privilege and I hope I have conveyed some insight into farming here on the prairies.

Through these musings I have received countless enquires about moving to Canada and made many new friends. Several of them have made it over and all but a few have settled in well and consider it a good move.

When we emigrated eight years ago to farm nearly 4000 acres, it was a huge adventure after all the difficulties of farming 250 acres in England, but I wouldn’t have missed it for anything.

It’s exciting being here in Canada’s premier province, Saskatchewan, when the place is really booming.

The country has the best skiing in the world and ice hockey is a religion, even among supporters of the local Melville Millionaires.

I realised shortly after Tony Blair’s Labour government was elected that it had no understanding of rural life and its importance in food production. But I never imagined it could so decimate and hamstring an essential industry so badly so quickly.

Clearly you should avoid any politicians whose surnames begin with B. Leaders Blair and Brown, along with ministers Brown, Beckett, and now Benn just seem to b.r it all up.

Emigrating has meant I have achieved many long-held ambitions, principally farming for enjoyment, and even one from my college days after seeing the newly-introduced International Axial-flow combines. I now own and drive a Case 8010.

You will still be hearing about Canadian farming, although from an Albertan perspective from now on.

I wish you all a fond farewell and the best of luck for 2009 and beyond.