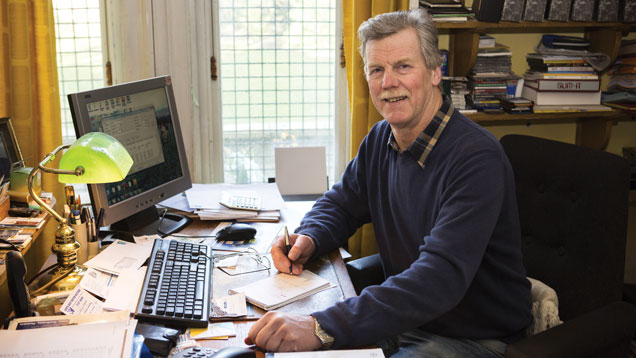 The farm has settled down now for the winter. All the cattle are housed and machinery mostly cleaned and put away.

So I felt a weekend off was in order and I have just returned from Dublin where I watched Ireland beat Australia in a close and exciting match.

This had to be celebrated and so I must admit that words are not flowing freely from my fingers at present!

The result puts Ireland in a confident position to go into the Six Nations Championship followed by the World Cup – lets hope they deliver!

I am currently chair of the Ulster Arable Society and over the last couple of months have been finalising plans for our annual Arable Conference, which we share with the UFU and the College of Agriculture in N Ireland.

This is the third year we have organised this and have been attracting well over two hundred arable farmers and others with an interest in the sector, so we must be doing something right.

This year will hopefully be no exception. We have an excellent panel of speakers organised to help us deal with CAP reform, particularly greening, and also on how to make the most efficient use of our soils and controlling the weeds that insist on living in them.

The conference is on 13 January at Greenmount Campus, Antrim and is a must for all forward thinking arable farmers. Full details available at www.ulsterarablesociety.org

My thoughts recently were with fellow Focus writer Rob Warburton in Western Australia following his article on losing 700ha of canola.

Having spent a couple of seasons in the Western Australia wheat belt many years ago, I have some understanding of the extremes our colleagues face in a much more volatile climate than ours.

We moan here about the weather, but seldom face the devastating storms other parts of the world experience and the feeling of emptiness when a crop is wiped out in a matter of minutes.

Insurance helps, and is maybe an option that we should investigate here, but it doesn’t compensate for the pride in our work and the effort we put in.

Robert Moore farms on the Molenan Estate in Northern Ireland, where his family have farmed for more than 200 years. He switched to arable production in the late 1990s, away from beef and sheep. He still has a small suckler herd on unsuitable arable land.