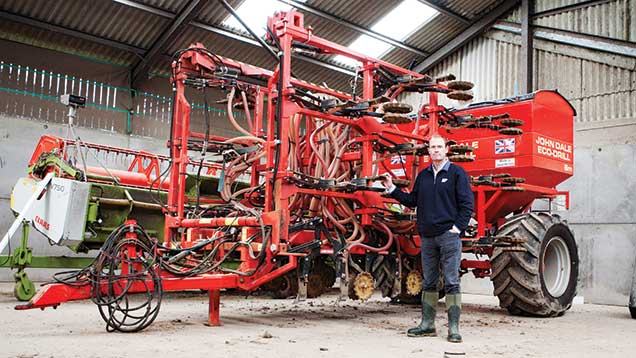 “One for the rook, one for the crow, one to wither and one to grow”. I’m guessing this saying predates GPS-guided variable-rate seeding, but it does seem rather more relevant to my spring barley drilled in February in a field known for generations as “The Rookery”.

I can sense the sighs and slow shaking of heads of my forebears echoing down the ages. A rather more modern piece of wisdom from the HGCA, that it takes 150 days to get barley from planting to emergence, did neatly predict the six-week length of the rook battle, and I think we’ll call it a score draw. However, I am just about to plant beans.

This is later than hoped as drilling opportunities have been rare. It’s peculiar as we haven’t had much in the way of rain, but the continuing overcast skies and cold temperatures have meant the ground just hasn’t dried at all.

We finally had a sunny day yesterday, during which more drying took place than the previous month, but it is now raining again.

The weather is reflected in my soil temperatures, which stand at 4.5C. This compares with 6-8C this time last year and is leading to slow growth and evaporation.

I know, of course, we must drill by soil conditions not calendar date, but what if you have an Easter holiday booked?

The Basic Payment Scheme – good grief, I’m almost wordless. We seem to have been sitting as helpless passengers in a several-month-long, slow-motion car crash.

We know what happened in 2005 with the introduction of the Single Payment Scheme, just like we had in our possession the recommendations from an inquiry into the 1967 foot-and-mouth outbreak when it struck again in 2001. When will we learn to learn from the past?

Reasons often mooted for historical civilisation collapse include degradation of resources and a tendency to ignore the blatantly obvious, and so, looking at a rook, I’m wondering about soils degrading and reliance on mined fertiliser and increased resistance development.