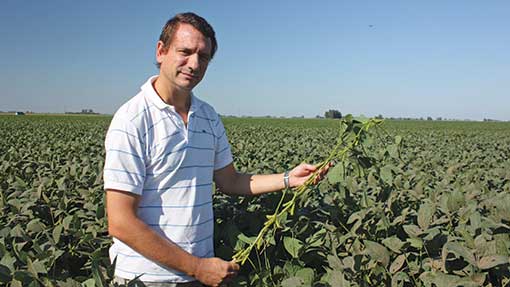 I have already harvested 502ha of soya beans, which is 80% of my total soya bean crop area based on my land in the Santa Fe Province.

Last week it finally stopped raining so the groundwater has lowered and the water at the surface has gone. A good weather forecast over the next week should allow me to finish the rest of the soya bean crop off. Compared with last year, we are about 15% behind.

During the first three months of the year we experienced 700mm of rain, which is more than 70% of the average annual amount. This has had a knock-on effect on soya bean yields, which fell significantly compared with the averages we were expecting.

Yields range from 2.7t/ha to 4t/ha, with an overall average of 3.5t/ha. It is clear that the amount of water lowered yield expectations at harvest. The second soya bean crop looks very good and has stood well, with encouraging results of 3.1t/ha on average.

Sunny days, clear skies and strong winds have helped dissipate excess water and have allowed us to once again travel on rural unpaved roads, making life much easier.

The corn crop continues with a wide disparity in yields, where the punishment of drought during the critical flowering period of the crop was evident. It is 2t/ha below the average of last year.

Perhaps this excess water is an opportunity to try to increase planting wheat this year. The seeding starts at the end of May and my intention is to plant 200ha as the sowing area has fallen in recent years due to the retention export tax and marketing mishandling by the government.